What is a Macchiato?

What Is a Macchiato? All Your Questions Answered

You’re bound to find them in every cafe, and social media treats them like a precious resource — macchiatos are inescapable. Today, I’m going to answer a pressing question: What is a macchiato, and why are they so popular?

Macchiatos are creamy and delicious but don’t let Instagram — or Starbucks — fool you. These drinks have a strange history — one that predates influencer culture and hype by decades.

Read on to indulge in macchiato culture, and buff your knowledge, so you know what you’re ordering. Here’s what I’m covering:

Where Do Macchiato Coffees Come From?

Unlike other coffees, macchiatos weren’t deliberately invented — they came to be almost by accident.

Their origin story is tricky to verify, but it’s believed these coffees first popped up in the 1980s, in Italy.

According to legend, Italian baristas needed a system to differentiate their straight espressos from those that contained milk. The baristas would mark the latter with a dash of milk, so they were easy to spot — presumably for the sake of wait-staff, and to prevent orders getting mixed up.

Macchiatos were never contrived to fill a gap in the coffee market. They were simply signifiers. In time, other nations adopted this system, although it’s unclear how macchiatos developed a style of their own. This leads us to the next fun fact. 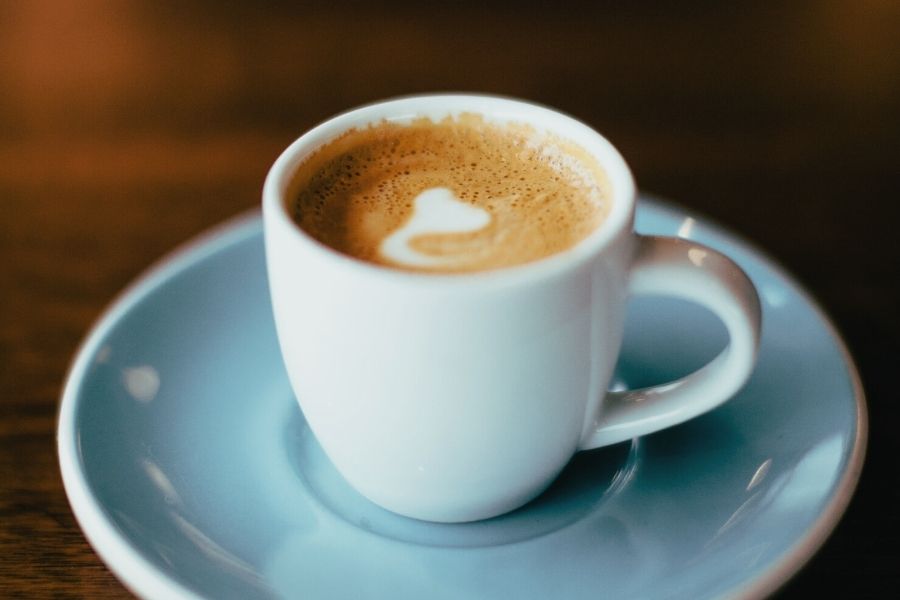 What Does Machiatto Mean?

There’s something charming about Italian. So much so that English countries use the Italian names for menu items in cafes and restaurants too. These words are romantic and majestic to us, but often their definitions are standard.

Macchiato is an example of this. In Italian, it means “stained,” or “marked.” The Baristas would mark the milky coffees to separate them from the rest.

Context matters, though. If you travel to Italy and want to order one of these delicious drinks, ask for a caffe macchiato. In this case, it means “coffee with a spot of milk.”

The name may be straightforward, but the drink is not. So on that note, let’s get into the nitty-gritty.

What Is a Macchiato Coffee?

There is no straightforward answer to “what is a macchiato drink” because there are different types of macchiatos. I’ll break it down for you, but you might want to grab a fresh cup of joe — there’s a lot of ground to cover here.

What’s In a Macchiato?

Technically speaking, a macchiato is exactly as its name implies — coffee with a hint of milk added.

But here’s the important part.

Italians don’t distinguish between regular coffee and espresso. In fact, in Italy, regular coffee is espresso. So, when you order a caffe macchiato, you’re explicitly asking for espresso with a dash of milk.

You may be asking, how is it any different from other creamy espresso drinks? Cappuccinos are espresso with milk, as are flat whites, and lattes. Good point.

It all comes down to the coffee-milk ratio. Cappuccinos are half and half, lattes are mostly milk with a touch of espresso for the kick. And, flat whites contain less milk foam, therefore, contain a higher concentration of coffee.

As for the macchiato ratio, they’re 90 percent espresso and 10 percent milk, making them the boldest of all the creamy coffees. The confusion arises because standard macchiatos (also known as espresso macchiatos) are brewed to this ratio, but the variations aren’t.

What Is a Latte Macchiato?

First, a barista will pour warm milk into a glass, then slowly pour a shot of espresso onto it. Milk is denser than coffee, so, if poured carefully, the espresso will float., creating a gradient effect. Then, the barista finishes off by adding a dollop of foam on top.

Latte macchiatos aren’t as bold as espresso macchiatos, but they’re much softer and creamier, and therefore easier on the palate. 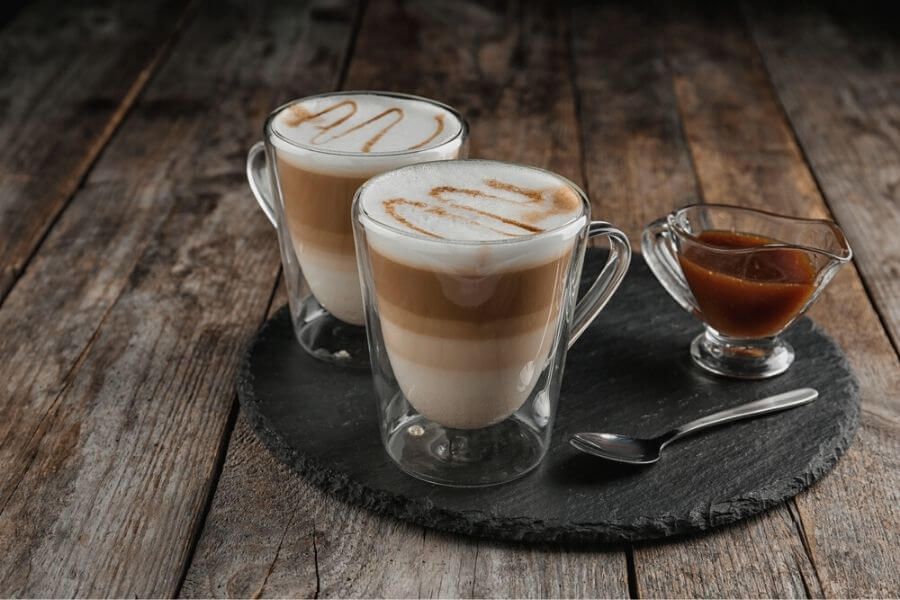 What Is a Caramel Macchiato?

Remember back in the 2010s when everyone was losing their minds for caramel macchiatos? You might be surprised to learn that Starbucks actually invented it in 1996, to celebrate the brand’s 25th anniversary.

Caramel macchiatos are far from traditional. The first layer is a pump of Starbucks’ original vanilla syrup. Then, baristas add milk and foam, and the espresso sits on top. It’s decorated with a cross-hatch drizzling of caramel sauce.

Fun fact: Starbucks, and other cafes, have ranges of macchiato drinks, including iced macchiatos, and different flavors like hazelnut, chocolate, and vanilla.

The simple answer is that the macchiato taste depends on the type you’re drinking. Remember, taste is subjective, so the best way to learn what a macchiato tastes like is to go out and try one. Still, we can determine its flavor profiles based on good old science.

Espresso macchiatos are not meant to be sweet. They’re bold and are brewed to emphasize the espresso’s flavor. Since the macchiato ratio leans strongly towards the coffee, the milk and foam won’t significantly dilute the espresso’s profile.

Latte macchiatos are the opposite because the coffee-milk ratio is reversed. Furthermore, lactose contains natural sugars — which is why adding milk to coffee changes its flavor. It is, in essence, a sweetener.

In either case, you’re at full liberty to add sugar or flavor enhancers to your macchiatos. You may get a few stares, but it’s your cup of java!

As for caramel macchiatos, syrup and caramel sauce may as well be pure sugar. Those without a sweet tooth might want to run for the hills!

Coffee strength is a language on its own. If you’d like to learn the ins and outs of it, check out my guide to the strongest coffees in the world. For now, all you need to know is that strength is an unregulated scam, and brands rate their bean strength by flavor, not caffeine.

Back to the macchiatos.

If we’re talking strength, as in boldness, it depends on what you’ve ordered. Espresso macchiatos are stronger than latte macchiatos, which are technically stronger than flavored ones. But it also depends on the beans, roast, and how the espresso was brewed.

On the other hand, if we’re talking about caffeine content, the answer is no. According to Healthline, espresso macchiatos are the weakest of the creamy coffees, thanks to serving size.

So, if you want boldness, grab a traditional macchiato. If you want a caffeine boost, latte macchiatos are your best bet. Who’d have thought?

Tip: If you want to up your caffeine game with a caffe macchiato, order a double shot, or, in Italian, a doppio. 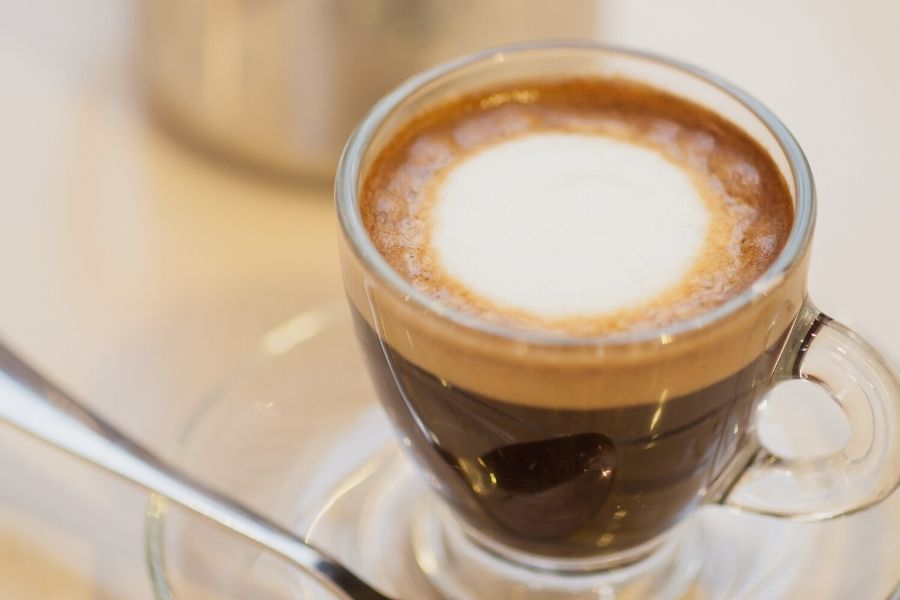 Is a Macchiato Hot?

Traditionally, yes, but times have changed. Whether or not a macchiato is hot is up to you.

Iced latte macchiatos are quite popular. Generally, they’re made by pouring cold milk and foam over ice and topping the drink off with espresso (or caramel sauce) as usual.

If and how this affects the coffee’s flavor profile depends on its brewing method. Cold brew, for example, is less acidic because the coffee is extracted over a longer period. It’s silky smooth and emphasizes the good flavors.

However, espresso requires quick bursts of pressurized heat to brew. Starbucks claims to use cold-pressed espresso that employs the same principles but eliminates hot water. Whether this is true espresso is up for debate.

Coffee and health is a complicated matter because there are many factors and variables to consider.

Caffeine and coffee are associated with a ton of health benefits, so if you enjoy it in moderation (and stick to one or two cups a day), you have nothing to worry about. But, if you’re adding sugar, drinking double shots, or going over the recommended daily caffeine intake, it could be bad for you.

Keep in mind that a macchiato is a milk drink, so it contains more nutrients, but also more calories. If you’re watching your figure or sticking to a diet, you may want to limit your consumption (or save the macchiatos for cheat days).

Caramel macchiatos — or any flavored macchiato for that matter — are in a league of their own. They’re high in sugars and calories and ranked as one of the unhealthiest drinks on Starbucks’ menu. They’re delicious, but at what cost? 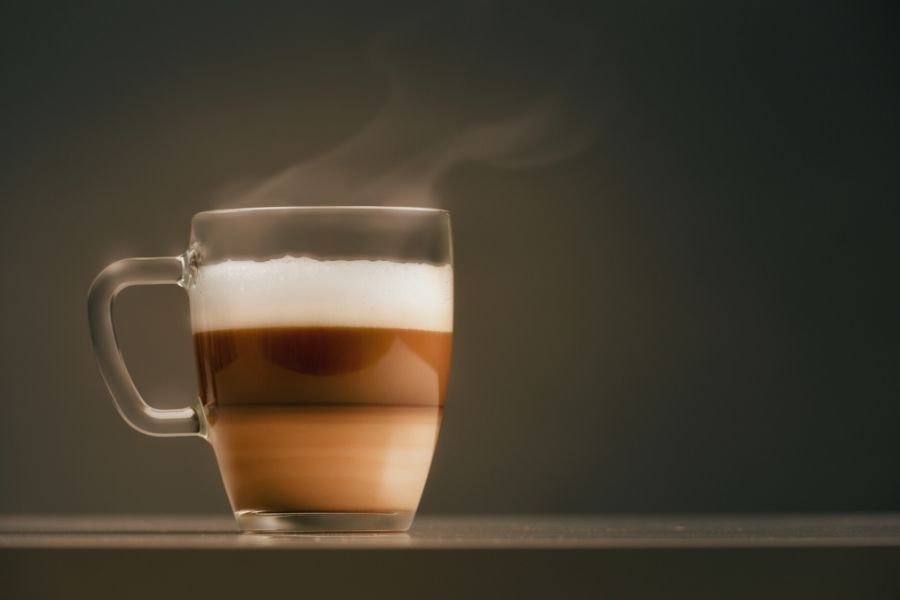 How to Make a Macchiato At Home

You don’t have to pop to the cafe every time you want to enjoy a macchiato. Here’s a crash course on how to make your own in the comfort of your kitchen.

First, you’ll want to invest in a home espresso machine if you don’t own one yet. They’re affordable, versatile, and will save you a ton of money in the long run. If you’d like a few pointers, check out our handy guide on how to use an espresso machine like a pro!

You’ll want warm milk. Some espresso machines do this for you, otherwise, microwaves are fine, but stovetops are better. If you have a thermometer, get your milk to 150 degrees Fahrenheit. It will be warm enough to enjoy without bubbling.

How to Make Espresso Macchiato

How to Make a Latte Macchiato

How to Make a Caramel Macchiato

If you’re not fussy, you can use regular or instant coffee in place of espresso. It might not be as bold or smooth, but it will still be delicious.

You can also try making iced macchiatos at home. A cold brewer is your best bet. Keep your milk cool, and add ice before you pour anything else. It will taste amazing! 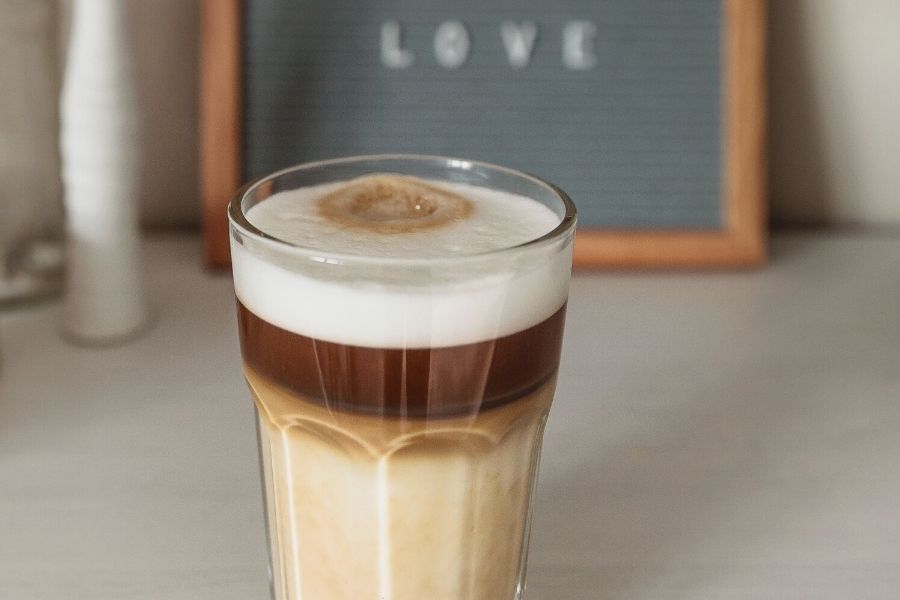 Macchiatos began as a means to make the lives of Italian waiters easier, but they’ve evolved into a staple and one of the most popular coffees in the world.

So, what is a macchiato? It’s a wonderful espresso beverage that you must try. It’s coffee, so you can’t go wrong.

What Is a Macchiato? FAQs

What’s the Difference Between a Latte and a Macchiato?

Lattes and traditional macchiatos have different coffee-milk-foam concentrations. The former is a blend of espresso and milk, and contains more foam. Macchiatos are layered and carry a much higher coffee-milk ratio.

Is a Macchiato Stronger Than a Cappuccino?

In terms of flavor, yes. In terms of caffeine content, no. Cappuccinos are half espresso and half milk, while macchiatos are mostly espresso with a touch of milk for texture. This means the espresso is less diluted in a macchiato, and so its flavor is more pronounced.

When it comes to caffeine, however, it’s the opposite. Macchiatos are generally served in smaller glasses, meaning you get less coffee to begin with, and therefore, less caffeine too.

Does a Macchiato Have Milk?

Yes. A macchiato is, by definition, a shot of espresso marked with a dash of milk. Some baristas and cafes add a layer of milk foam for texture too. If you’re vegan, or can’t consume dairy, there are plant-based alternatives. Oat milk is excellent as it’s high in nutrients, foams easily, and won’t alter your coffee’s taste.

Is a Macchiato Stronger Than Regular Coffee?

No, unless you’re increasing the number of espresso shots. Technically, espresso has a higher caffeine content than regular coffee, but regular coffee is served in higher volumes and, therefore, has more caffeine overall.