The Strongest Coffee in the World 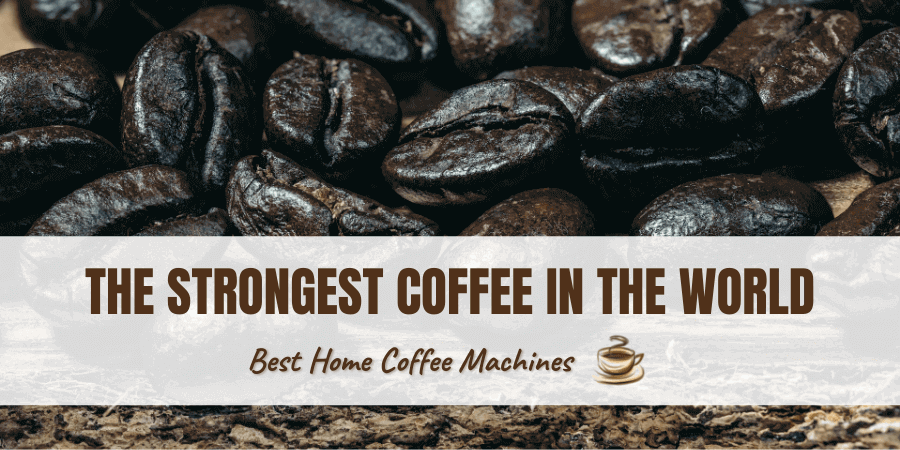 A Test of Strength: The Strongest Coffee In The World

Don’t deny it, at some point, we’ve all boasted about our caffeine tolerance or how we prefer the strong stuff. But let’s face it, we all have limits. The question is, how strong is too strong?

To answer this, and to find out which is truly the strongest coffee in the world, we have to journey to the dark side — literally! The most caffeinated coffee in the world gives me the jitters just thinking about it, and you’re about to see why.

But first, there’s a lot of ground to cover here, so I’ve broken it down for you. Here’s what’s coming up:

What Does Coffee “Strength” Mean?

Before we reveal the strongest coffee in the world, we have to establish what coffee ‘strength’ is. It may seem obvious at first but it varies depending on the context, and strength means different things to roasters, brewers, and consumers.

You may have noticed that the coffee grounds come with a strength rating — usually a number from one to five, although, stronger roasts may go as high as seven.

Consumers tend to believe the higher the number, the more kick they’ll get from their cup, but this is strategic marketing as opposed to a true indication of strength.

These ratings actually refer to the coffee’s profile, particularly its bitterness. The darker the roast, the more pungent its flavor. Raw beans have none of the piquancy you’d expect from a brew because the roasting process is what gives coffee its distinct aroma and taste.

Speaking of green coffee beans, the International Trade Centre states there is no universal system that grades coffee. So it’s safe to assume that manufacturers use their own criteria when rating coffee, but here’s what the numbers roughly mean: 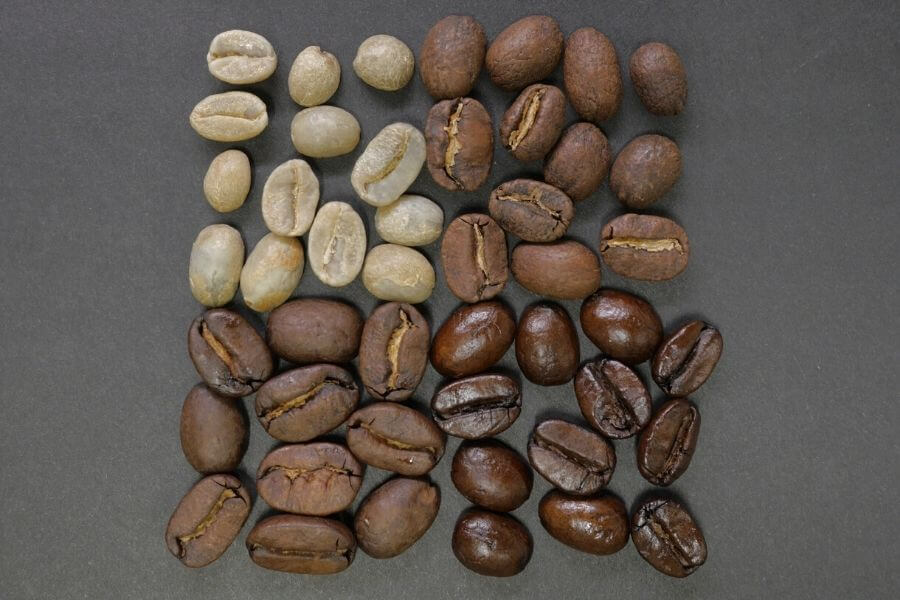 Did you know that bitterness has little to do with caffeine content? Science of Cooking explains that while there are differences between the densities of light and dark roasts, and therefore dark roasts have a higher caffeine-mass concentration,  roasting has little effect on caffeine.

This means a sweet, light roast can have just as much caffeine as a dark roast. It might even have more. Your joe’s caffeine content depends almost entirely on two things: the beans you’re using and how you brew them.

Caffeine is highly soluble in water and is one of the first chemical components to draw when soaked. Most reports claim that caffeine is released within the first 30 seconds of brewing. It won’t evaporate either, so the amount of caffeine stays steady whether you steep your coffee for five minutes or five hours.

That said, coffee concentrates, for example, those produced in espresso and cold brew, have higher caffeine contents because they’re not as diluted.

Keep in mind, though, you’ll get more caffeine from a regular coffee than a shot of espresso simply because the serving is larger.

So, Which Beans Are the Strongest?

Two types of beans make up the majority of commercial coffee: Arabica and Robusta. Robusta contains double the caffeine of Arabica and its flavor profile is also more bitter by default as well.

Based on these findings, the strongest coffee type out there should be a concentrate brewed from Robusta beans.

But let’s not get ahead of ourselves. Caffeine is a serious business and we must explore its effects so you can see why drinking the strongest coffee on earth may not be a great idea…

Coffee is socially acceptable and even encouraged in almost all circumstances. In fact, there isn’t a single country in the world that prohibits coffee.

It’s so ingrained in our culture that we often cast the complexities of caffeine aside. However, the reality is that caffeine is a psychoactive substance — a stimulant to be precise.

So why don’t treat it the same as other stimulants such as alcohol, nicotine, and illicit substances?

One reason is because the FDA declared caffeine as generally safe, with a recommended daily intake of up to 400 mg for healthy adults. That’s around four or five cups of regular coffee per day, which is good news for us!

Secondly, caffeine isn’t taken as seriously as it should be. Caffeine addiction was only confirmed in 1994 and wasn’t categorized as a mental illness until 2013 — so recent, it’s shocking.

And thirdly, caffeine has notable health benefits, which keep it in our good graces. According to Healthline, responsible coffee consumption has a wide array of perks, including:

Reduced risk of Parkinson’s, Alzheimer’s, diabetes, and other illnesses

Not to mention that coffee contains a good number of essential nutrients including vitamins B2, B3, B5, along with manganese and potassium.

While we hate to admit it, caffeine — and by extension, coffee — is a drug. One that can have a severe impact on your health when abused.

When Coffee Kills: How Much is Too Much Coffee? 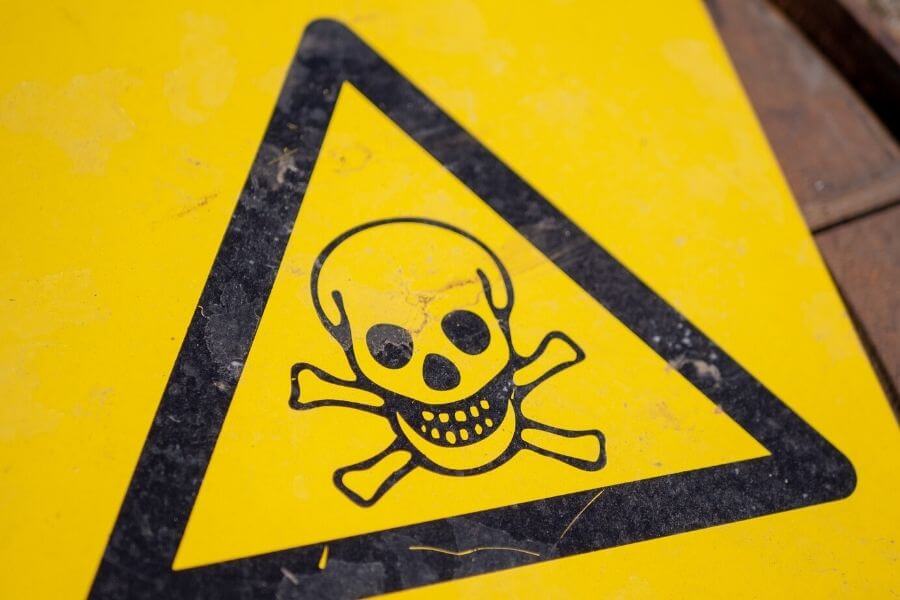 Vox reports that fatal caffeine overdoses are extremely rare, with 45 caffeine-related deaths recorded between 1959 and 2010. Though caffeine is not as dangerous as other stimulants, it’s not harmless.

One report shows 3702 instances of caffeine poisoning recorded in 2016. And let’s not forget Davis Cripe, a 16-year-old boy who lost his life after a freak caffeine overdose in 2017. Coroners determined that it wasn’t necessarily the amount of caffeine he had (believed to be around 470 mg), but rather how quickly it was ingested.

It’s widely accepted that 10 grams of caffeine is enough to kill you, although an overdose before reaching this threshold is likely.

It’s normal to feel a bit of a buzz when you drink coffee — or any caffeinated drink for that matter. Depending on your tolerance, you may experience other symptoms such as hyperactivity, irritability, an increased heart rate, and dehydration. These effects are usually little cause for concern.

However, when you have far too much caffeine, the repercussions are more severe. Symptoms of a caffeine overdose include:

What’s the Strongest Coffee in the World?

Now that we’ve learned the disturbing facts about caffeine, it’s time to get to the fun part: discovering the world’s strongest coffee!

A word from our bosses first:

At Best Home Coffee Machines we are big fans of the bean, but we cannot, in good conscience, recommend you drink the coffees detailed below.

This list is intended for educational purposes only. We are not accountable or liable for any consequences that result from disregarding this warning and ingesting the products listed below.

DO NOT try these coffees if you are pregnant, have a pre-existing condition (with emphasis on heart conditions), or are hypersensitive to the effects of caffeine. 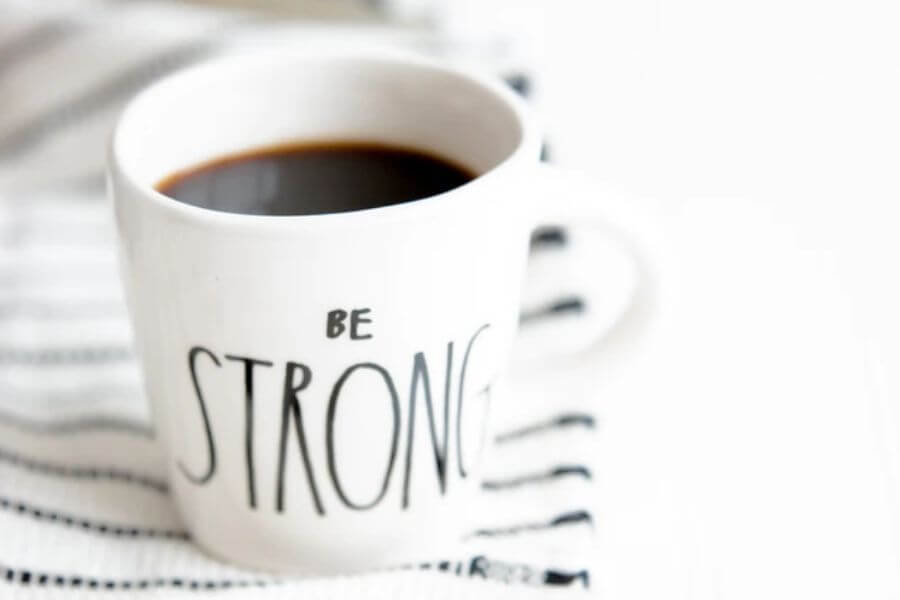 I’m not sure if it’s the hip packaging, the ominous name, or pure hype, but there was a time when everyone raved about Death Wish.

Founded in New York in 2012, when Death Wish launched, it was unlike anything we’d ever seen. At 600-plus mg of caffeine per cup, it covers the recommended daily intake and then some!

Death Wish is a blend of Arabica and Robusta beans that’s noted for its bold, but not bitter, profile.

Death Wish insists it’s the strongest coffee in the world, even going as far as to offer a full refund to customers who argue this claim. But, according to science, it only gets the bronze medal in this match-up.

In 2016, Biohazard Coffee claimed the strongest coffee in the world crown with a whopping 928 mg of caffeine per serving. Imagine the jitters.

The company is quite secretive and there’s little information available on its website. What we know for sure is that Biohazard contains single-origin Robusta beans that are lightly roasted for “maximum caffeine retention.” It’s said to have a less intense, less bitter, and cleaner flavor than Death Wish.

Biohazard also refuses to let go of its self-proclaimed title as the world’s strongest coffee, but even with the absurd amount of caffeine, it still only comes second place.

You need nerves of diamond to handle Black Insomnia; it is, indisputably, the most caffeinated coffee of them all. Launched in Cape Town in 2016, Black Insomnia is a blend of Arabica and Robusta that is best enjoyed black, according to the company.

With a ludicrous 1105 mg of caffeine per cup, Black Insomnia is almost twice as strong as Death Wish. The brand advises that if you drink their product, you should keep it to one or two cups a day.

This coffee is a light-medium roast that’s both sweet and savory with hints of chocolate, hazelnut, and caramel.

Legend has it that founder Sean Kristafor created Black Insomnia because he couldn’t find a coffee with the kick or taste he was looking for. So he set out to create his own brand that married flavor and power.

And now you know. Black Insomnia is the strongest coffee on Earth — by a landslide. Proceed with caution!

A Note on Caffeine Culture

The coffees listed above are cool, but we must ask ourselves: is pushing limits and teetering on heart failure really necessary to enjoy a caffeine boost?

It’s important to understand that these brews are novelty coffees that — according to science — are not intended for daily consumption. There are even theories that these coffees exist with the sole purpose of outdoing each other, catering to a market that unintentionally glorifies substance abuse as a means of getting through the day.

Don’t get me wrong, I enjoy my caffeine fix just as much as the next person, perhaps even more, but remember that there’s more to coffee culture than how many jitters you can tolerate. 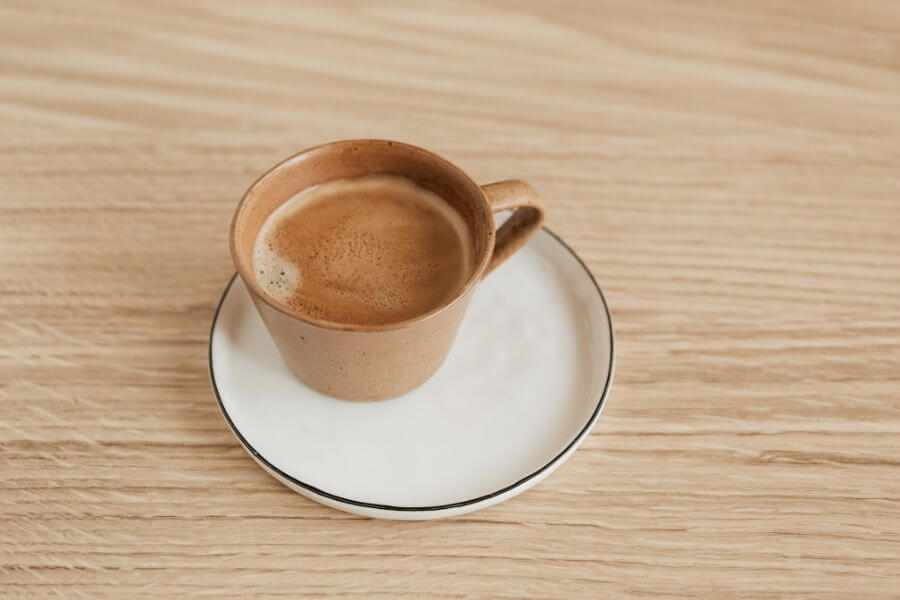 To sum up what we’ve learned:

Strength can be a matter of flavor, roast, or kick. Flavor and roast are ranked by manufacturers, so the only way to truly determine the strongest coffee in the world is to check caffeine concentration. The current holder of this title is Black Insomnia coffee, which could be as strong as it gets (legally, at least).

If your nervous system isn’t up to extreme joe, the best thing to do is to look for Robusta coffee. It’s much stronger than Arabica, both in taste and oomph.

Have you tried the coffees that ranked here? If not, are you brave enough to? I’m eager to know, so drop me a comment below! Don’t forget to share this article and I’ll see you in the next one.

How Do They Make the World’s Strongest Coffee?

The exact brewing methods that Death Wish, Biohazard, and Black Insomnia use are closely guarded secrets. We know that they mostly use Robusta beans and roast in such a way that excess caffeine is retained.

It’s worth noting, though, that all three companies making the world’s strongest coffee claim their coffees are 100% natural.

Which Country Has the World’s Strongest Coffee?

There are two possible answers. First, there’s the USA with the most novelty coffee brands. Some of these brands, including Death Wish, are available in stores and cafes across the country.

Can the World’s Strongest Coffee Kill You?

Yes, it can. But remember, any coffee can be deadly in exorbitant amounts. It would take roughly 70 to 100 cups of regular coffee to kill you. By contrast, just 10 cups of Black Insomnia could have the same effect.