What Is A Flat White Coffee? Flat Whites Explained 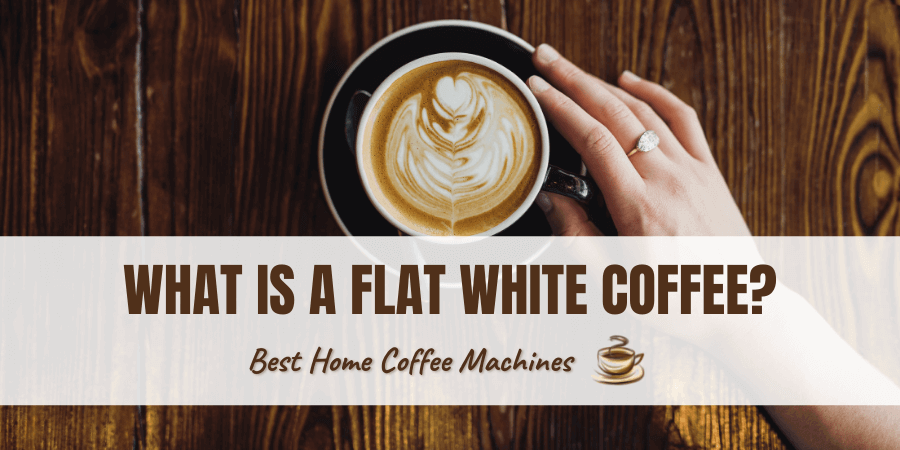 What Is a Flat White Coffee? Everything You Need to Know

A cup of joe’s type, quality, and the flavor is determined by a number of things including the beans, their roast strength, how it was brewed, and how it’s served to you. Change one of these elements, and you’ll have an entirely different experience.

It’s both a blessing and a curse because it makes it all the more difficult to order coffee (see the difference between iced coffee and cold brews for a working example).

To cut through the microfoam and help you avoid confusion, today I’m answering the question: what is a flat white coffee?

Most people will tell you that a flat white is an espresso-based drink, but a more accurate description is that it’s a milk-based drink.

Made with a single or double shot of espresso that’s blended with steamed milk and topped off with a thin layer of microfoam, a flat white is smooth and rich but not necessarily bold, intense, or strong.

Flat whites are generally consumed in smaller servings. While there are cafes that serve large flat whites, the golden ratio has to be adjusted or the espresso can lose its profile.

They are often seen as basic, but this is far from true. It requires skill to blend a perfect balance of espresso, milk, and foam without one drowning the other elements out.

Flat whites are an excellent (and simply delectable) way to enjoy espresso, especially for those who find the concentrate too bitter or intense for their liking.

Where Is Flat White Coffee From?

Flat white coffee is a fairly recent trend in the USA, with Starbucks releasing and popularizing it in 2015. But while Americans were enjoying the new delight, a war over its origins brewed on the other side of the planet.

Starbucks nearly caused a diplomatic incident when it launched the flat white because it shared a press release on its website that described the new coffee as “originating in Australia in the 1980s.”

New Zealanders were not happy. Kiwis claim that they invented the flat white and that credit belongs to their country. The drink joins a growing list of things NZ produced but Australia claims, including Russell Crowe and the pavlova.

Credit for a coffee drink shouldn’t be divisive, right?

But this coffee’s origin story is a big deal. Australia and New Zealand are not exactly known for coffee and the flat white puts its country of origin on the bean map.

So where is flat white coffee from and who invented it? Unfortunately, no one knows for sure, but, for interest’s sake, here are the legends of flat white history:

There is an entire Australian website dedicated to putting New Zealanders in their place regarding the matter, even going as far as to accuse Kiwis of knowingly stealing the flat white.

According to Aussies, an Australian named Alan Preston opened a cafe in Sydney in 1985 and marketed the drink — a white espresso — as a flat white on his menu.

The idea that Australians created the flat white is supported somewhat by the number of Italian-Australians who brought espresso and its culture with them.

New Zealand’s account of how the flat white came to be is less dramatic. Frank McInnes, a barista in Wellington in 1989, accidentally created it when he misjudged how much milk he had to work with for a cappuccino. He admitted his mistake to the customer saying “Sorry, it’s a flat white.”

The ‘Wellington Flat White’ — as it was listed on this cafe’s menu — was facetiously described as ‘a failed cappuccino.’ But it caught on and spread throughout New Zealand.

McInnes said that the name, and other white espressos, may have existed before his blunder, but that the flat white Starbucks marketed as an Australian contribution actually belongs to him — and New Zealand.

But, he isn’t too offended, having gone on record saying that he was “chuffed” that his accidental invention spread worldwide.

As McInnes pointed out, there are various ways to enjoy white espressos, cappuccinos, one of the most prominent and well-loved coffee around is just one example.

So what’s the difference between flat white and cappuccino?

They’re not as similar as they seem. Not in their ratios, textures, flavors, or strength. 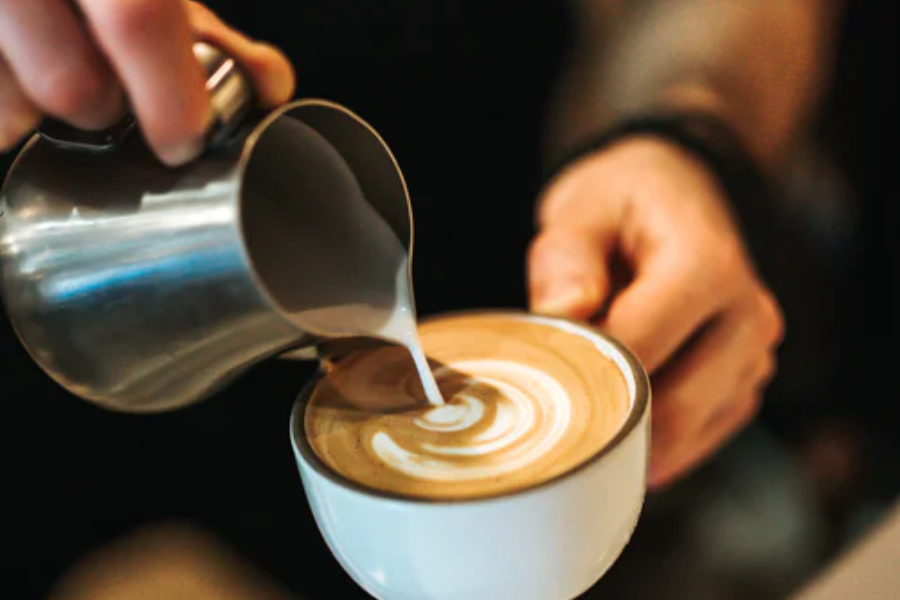 I’ll detail exactly how flat whites are made and the flat white ratio later, but for now, all you need to know is that cappuccinos are far more balanced.

In fact, while a flat white is heavily diluted by milk but isn’t overpowered by microfoam, cappuccinos are equal parts espresso, milk, and microfoam. So flat whites are smoother and cappuccinos creamier.

Cappuccinos can be made with either a single or double shot of standard espresso. Flat whites are typically a double shot of ristretto — a more concentrated type of espresso achieved by disrupting the brew a bit earlier than usual.

This is a matter of preference because it comes down to texture and flavor. If you prefer a smoother, lighter, and milkier coffee, choose a flat white. It’s rich without being heavy and contains a decent caffeine kick without the intense flavor or concentration of straight espresso.

If you prefer a fluffier coffee, with a more pronounced espresso profile that hasn’t been diluted as much, stick to cappuccinos.

Flat White vs Latte: Which is Which?

Perhaps an even bigger question is: what’s the difference between flat white and latte espresso? Lattes have long had a reputation as juvenile cappuccinos. In fact, if you order a “latte” in Italy, you may be served a glass of straight milk.

It’s easy to confuse flat whites and lattes because, at first glance, they appear to be exactly the same. So what sets them apart and which one is better for you? 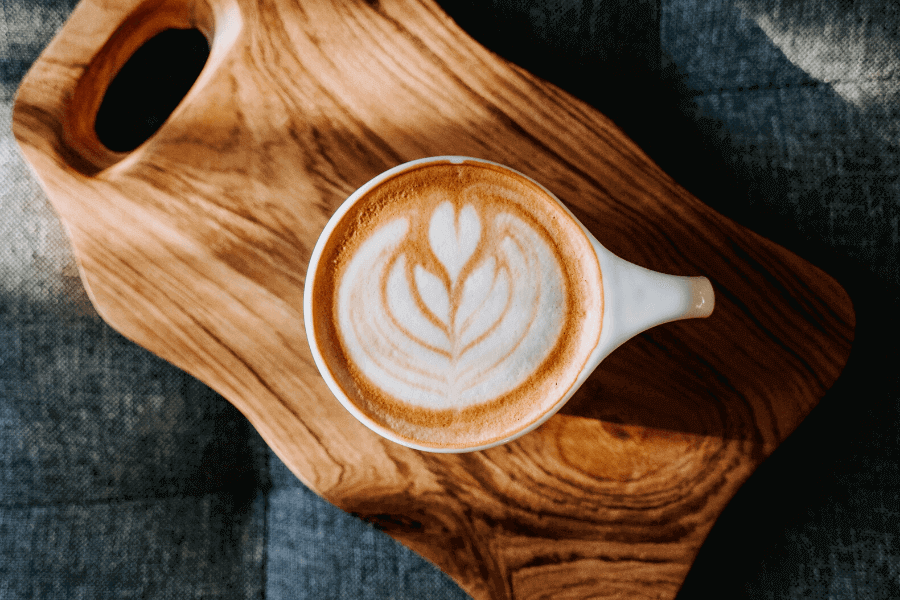 The easiest way to tell a flat white from a latte is to look at its milk foam. Lattes are topped off with a thick, noticeable layer of microfoam. Flat whites are, well, flat, with the microfoam barely rising from the surface.

Like cappuccinos, lattes are creamier (and are certainly handier when it comes to growing a milk mustache).

Lattes come in a variety of sizes and you have a choice of single or double espresso shots. Flat whites and lattes are, for all intents and purposes, equally matched in caffeine content, but flavor-wise, flat whites are a tad bit stronger because they’re made with ristretto and aren’t as diluted with microfoam.

They are so close together that if your cafe doesn’t offer flat whites, you can compromise by ordering a small latte — you might not even notice the difference.

It comes down to one thing: do you prefer the creamier foam layer? If yes, lattes are for you. If you can do without them, flat whites are your drink of choice.

How To Make a Flat White Coffee

White espresso may seem like the easiest thing in the world: just add some warm milk to espresso and, hey presto, right? Not quite.

Before I explain why brewing your own flat white coffee is quite the task, let’s take a look at how the cafes do it.

Flat white coffee is made with one-third espresso and two-thirds steamed milk. A thin layer of microfoam, usually around 20 mm thick, tops the drink.

They’re traditionally crafted with whole dairy milk. There isn’t anything wrong with substituting for a vegan or lactose-free option, but bear in mind that it won’t have the authentic flat white flavor, and more importantly, it’s harder to texture the milk because whole milk contains more sugar and fat.

You certainly can, but it’s not as easy as one-two-three. First, you’re going to need an espresso maker, if you don’t already have one. You can start by checking out our favorites!

If your machine doesn’t have a steam wand, you’re going to have to Macgyver your own microfoam the manual way.

Once you have an espresso machine sorted and have figured out how to texture your milk, the steps are relatively easy: 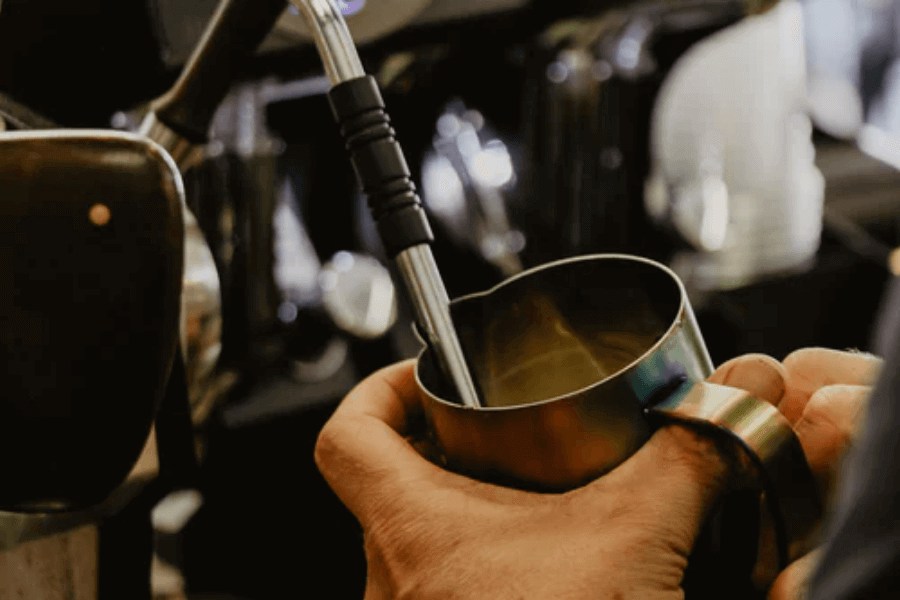 If you’d like to be real fancy and try your hand at making ristretto, use the same volumes and grounds that you would for standard espresso but half the brewing time. For example, if an espresso shot takes 30 seconds to pull, cut your shots after 15 seconds.

Using your espresso machine’s steam wand, insert the steam wand into your pitcher of milk, turn it on and wait for it to work its magic. Aim for an airy consistency. If you have a programmable machine, the optimal flat white milk temperature is 140 to 150 degrees Fahrenheit (60 to 65 degrees Celsius).

Step Three: Pour Your Milk Over Your Espresso Shots

In some cases, there will be a natural top layer of microfoam. If not, go ahead and add one manually.

What is a flat white coffee?

Flat whites are ristretto-based milk drinks are they’re known for a smooth texture and softened flavor. They’re an excellent way to enjoy espresso if a straight shot is too harsh for your liking. And there’s plenty of caffeine if you’re looking for a boost.

Though the origins are unclear, the flat white is a hit because it’s smoother than both a latte and a cappuccino, and is relatively easy to brew at home if you have the right equipment.

Which white espresso is your favorite and are you team Oz or team Kiwi in the great Flat White War?

While flat whites don’t cost more to produce than any other white espresso, cafes may charge more because of extra labor involved. It requires skill to create the perfect flat white and they are craft coffees through and through.

It’s a bit of a gray area. Flat whites are not on the naughty list of treats, but because they’re typically made with whole milk, they have more calories than other coffees. If you’re sensitive to dairy they’re out of the question, though you could substitute whole milk for almond or soy milk. Flat whites are a good way to combat heartburn and acid from coffee.

Is a Cortado the Same as a Flat White?

Though cortado and flat white coffee are both made by mixing espresso and warm milk, a cortado is technically closer to a cappuccino than a flat white because its coffee-milk ratio is half and half. It’s also served in much smaller portions, closer to an espresso shot.