How to Grind Coffee Beans Without a Grinder 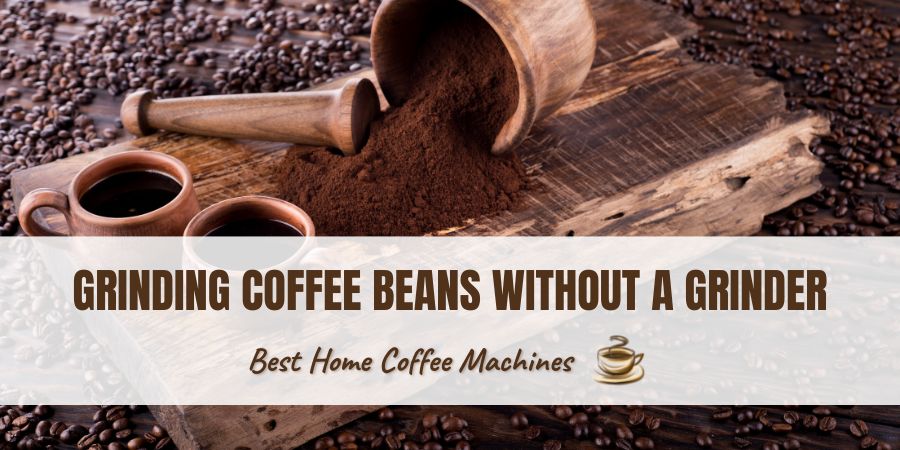 How To Grind Coffee Beans Without a Grinder

Ever been taunted by your coffee maker and whole coffee beans, sitting there on the bench ready to be used, but you don’t have a coffee grinder? There is a solution. Knowing how to grind coffee beans at home (without a grinder) can mean the difference between staring longingly at those coffee beans and enjoying that rich cup of java.

Most bean lovers understand the importance of freshly ground coffee. Since coffee starts losing its flavor and aroma quickly after grinding, grinding beans right before brewing is a way to lock those flavors in.

Fortunately, you have other options if you don’t have an actual grinder for coffee beans.

Simple household tools like a hammer, rolling pin, or food processor can be used to grind coffee. There’s no need to contemplate going without your morning cup of joe. Read on for the critical intel on grinding coffee beans without a grinder.

Coming up in this article:

Benefits of Grinding Your Own Beans

As soon as coffee beans are ground, they’re exposed to air and moisture in the environment. Natural oils from the beans also escape. This accelerates the loss of coffee’s wonderful aroma and flavor.

In fact, the longer you wait between grinding and brewing, the more that disappears. By grinding immediately before brewing, you preserve more of that flavor and aroma, and your java tastes better.

When grinding your own coffee beans, you’re fully in control of how much you grind and the grind level. If you only need a little ground coffee, that’s easy to accommodate. You’re also not restricted to just one grind level, as you would be with a bag of pre-ground coffee. You can grind coarsely for French press java one morning and then grind finely for espresso the next. 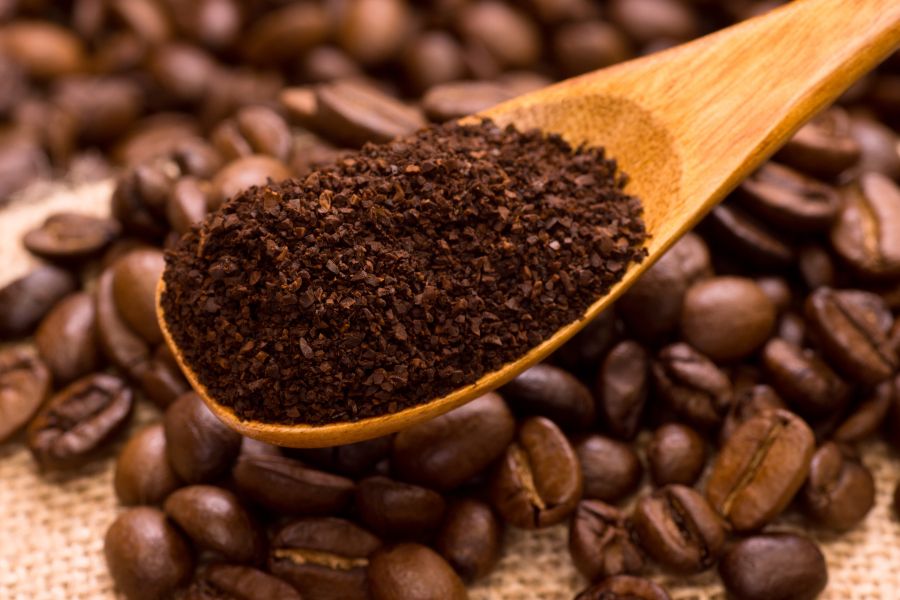 If you’re jonesing for that cup of joe, but all you have are whole coffee beans and no grinder, what’s a person to do?

We have some alternative and unconventional methods that can be used to grind coffee beans without a grinder.

An electric blender grinds beans quickly as it operates just like a blade grinder for coffee beans. Any blender will do a decent job but expect inconsistent grind sizes. However, if you want a coarse grind, this can get the job done and quickly.

Heat is created when a blender is operating, and that heat can be transferred to the beans. This may result in a beverage that tastes bitter. You should also carefully clean your blender afterward, or anything you put in the blender later may smell or taste like coffee.

Like the blender, a food processor is similar to a blade grinder. As with a blender, grinds may be inconsistent, and heat generated may damage the coffee beans. Most food processors can produce an adequate coarse grind, though.

Again, you should thoroughly clean your food processor after using it to grind coffee. Unless you like your chopped veggies to taste like java, of course!

A rolling pin is more labor-intensive than the previous methods as it’s powered by your arms and not electricity. It also takes considerably longer than electric methods. However, it’s possible to get a coarse, medium, or even fine grind with a rolling pin. Granted, not everyone has one on hand, but if you don’t, you probably have at least one of the other tools.

The mortar and pestle have been used for centuries to grind coffee, spices, and other food items. It’s definitely labor-intensive as it requires some arm strength. You’ll also have to be cognizant of the fact that there’s no lid — you don’t want coffee beans to go flying!

It’s wise to use a smaller amount of coffee beans than with other methods so you can keep everything within the bowl. However, you can get a very consistent coarse, medium, or even extra-fine grind.

Pro tip: Hold the pestle with your stronger hand and use your other hand for the mortar bowl. This will make it easier to crush the beans. 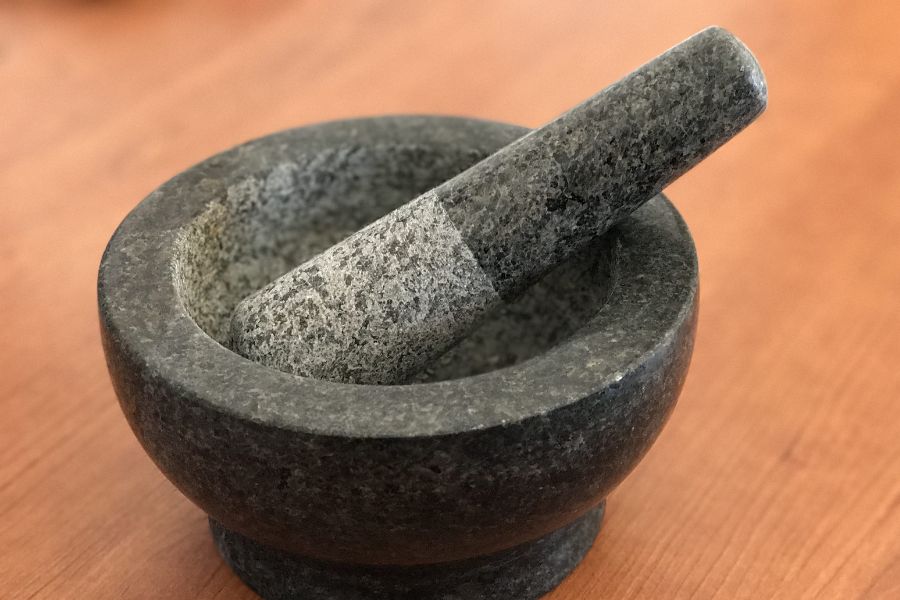 You may already have a meat tenderizing mallet in your kitchen. If not, an ordinary hammer will also do the trick. However, don’t use it as you would when hammering a nail. You’re not smashing beans, you’re just applying pressure to crush them.

Use caution with this method as you can damage countertops if you apply too much pressure. A large cutting board offers the best protection. You can pretty easily achieve a coarse grind with a hammer, although the grinds may not be consistently sized.

No, you won’t be slicing coffee beans. Instead, use the flat of a knife blade to crush beans into a medium or medium-fine grind level. This method offers more control over consistency as only a few beans are crushed at a time.

It goes without saying that you should use caution with this method, though. Knives can be sharp and dangerous, and you want to make java, not visit your local hospital’s emergency room!

What You’ll Need for These Methods

Before you can start using these methods of grinding coffee beans, you’ll need to make sure all the necessary items are available.

How to Grind Beans with No Grinder

Keep in mind that there’s no lid with a mortar and pestle, so if you put too many beans in a mortar bowl, they may fly out. For this reason, only use enough beans to fill no more than half the bowl. 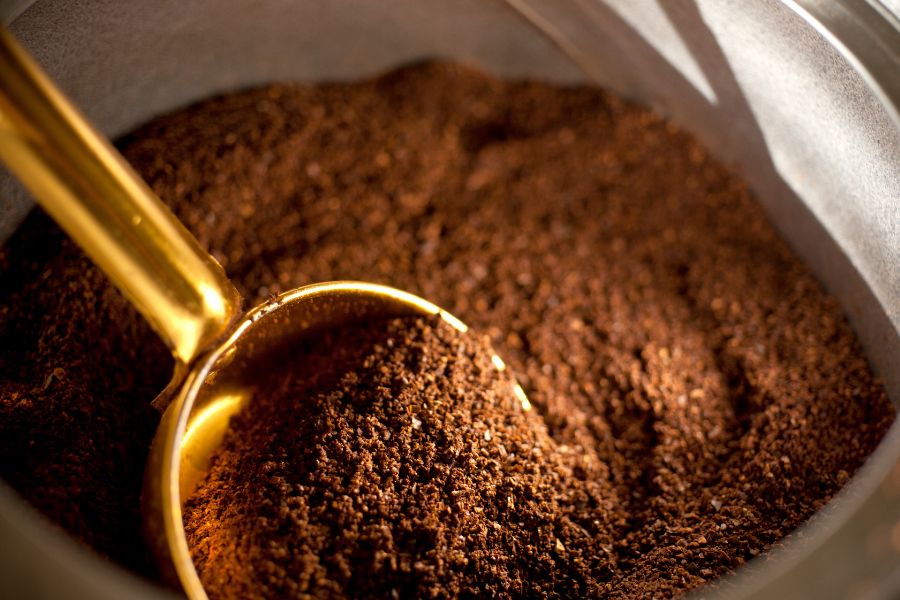 The first time you try a new technique may be a little rocky, and grinding coffee beans without an actual coffee grinder is no different. We have some suggestions that might make the process easier.

If you’re grinding by hand, do a few at a time – Using small amounts means that the whole process takes longer but it’s the best way to get consistent grind sizes.

When done grinding, wash your tools – If you don’t wash them immediately, the coffee remnants and aroma will affect whatever food is used next. This is particularly true with blenders or food processors. But it’s also a good idea to thoroughly wash your rolling pin, knife, hammer, or mallet.

Don’t have unrealistic expectations – Grinding without a coffee grinder will not produce ground coffee that’s as good as what a real grinder produces. It’s best not to go into this process expecting that perfect espresso grind. French press java is your best bet if you’re grinding coffee beans with anything other than a coffee grinder. This method is much more forgiving, and you don’t have to work quite as hard to reach a proper grind.

Whether your coffee grinder just conked out, or it’s simply nowhere to be found, you don’t have to face your morning without java. Grinding coffee without a grinder is a useful skill, one you can do manually or with other kitchen appliances. Learning how to make coffee from beans without a machine will come in handy at some point.

If you’re grinding coffee beans by hand, expect it to take some strength and time. Depending on which method you choose, you can grind coarsely or finely. However, don’t bank on this ground coffee being the same as what an actual coffee bean grinder can make.

It’s going to be difficult to achieve consistently even grinds, but you’re more likely to get that by using a very small amount of coffee beans at one time. So pull out that rolling pin or food processor and get busy grinding!

How to Grind Coffee Beans Without a Grinder FAQs

Can You Brew Coffee Beans Without Grinding Them?

Technically, yes, it’s possible to brew coffee beans without grinding them, but the process takes a lot longer than with ground coffee. You can simmer whole beans in water for at least an hour and then strain that liquid for coffee. However, it’s much faster to grind them with kitchen tools or gadgets like a food processor.

How Can I Grind Coffee Beans Without a Grinder?

If you don’t have a coffee grinder, there are several ways to grind coffee beans with tools in your own kitchen. You can grind beans with a hammer or meat tenderizer, blender, food processor, rolling pin, or the flat of a knife blade.

Do I Really Need a Coffee Grinder?

Yes, we suggest a coffee grinder for anyone who regularly brews java at home. The best coffee comes from freshly ground coffee beans, and you will maximize that freshness by grinding beans right before brewing.

Is It Better to Manually Grind Coffee?

It’s more time-consuming to manually grind coffee beans, and it’s certainly easier to use a real coffee grinder. However, in the event that you don’t have a bean grinder, there are ways you can manually grind beans.

Will Coffee Beans Ruin a Blender?

No, coffee beans will not ruin a blender, but you should carefully wash all blender parts immediately after using them to grind coffee. Otherwise, whatever goes into that blender next may pick up some of the java taste and smell.

Can I Grind my Coffee Beans the Night Before?