Why is Coffee Called Joe? How the Phrase Came About 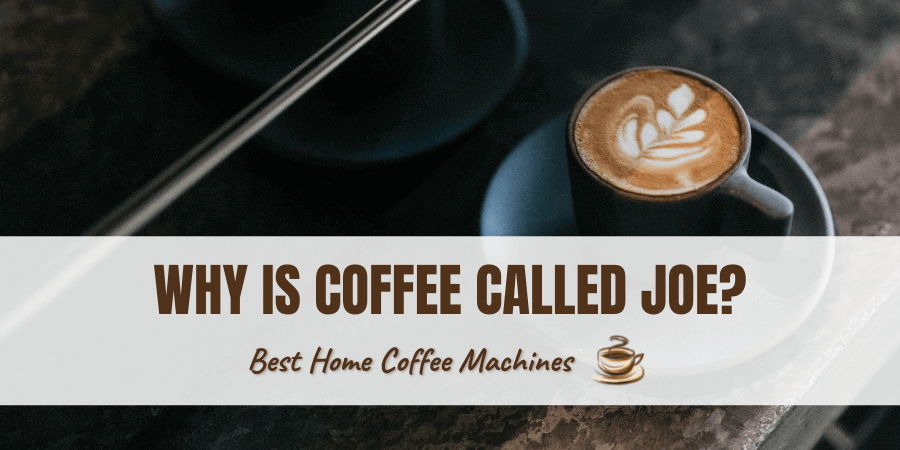 Why Is Coffee Called Joe?

There are many phrases by which you can refer to coffee, but one of the more puzzling ways is by calling it a cup of joe. And, while the word “joe” seems to have absolutely nothing to do with coffee, it remains a common name for it.

So why is coffee called joe? Was it named for someone? Maybe the word “joe” has some significance only known by the exclusive java aficionados. Or perhaps there really is no connection with coffee at all.

Let’s take a closer look at the theories of how this odd phrase originated and why it’s still commonly used today. We’ll cover the following topics:

The Different Names for Coffee

We’ve all heard them, the nicknames for coffee. Some are more complimentary than others. For example, do you really want to drink a beverage referred to as “sludge?”

However, there are lots of other, more flattering words that can be substituted for coffee.

Why Is It Called a Cup of Joe? — Origin Stories

When it comes to why coffee is called joe, there are four main theories regarding how this phrase came about.

The word “joe” may have developed as a natural progression of language. It’s believed that it can be traced back to the term “jamoke,” which is a blend of words used to describe coffee in the 1800s. “Java” refers to a region of Indonesia where coffee is grown, and “mocha” relates to coffee produced in the Middle Eastern country of Yemen.

Together, they form “jamoke.” It’s suspected that this mash-up of place names was eventually shortened to “joe,” In that, a “cup of jamoke” became a “cup of joe.”

As this story goes. In the early 1900s, Josephus Daniels was the Secretary of the Navy. In 1914, he ordered an end to all alcohol consumption on US Navy ships, even banning the mere presence of it on military vessels.

US sailors weren’t pleased with the enforced strict morality rules. However, strong coffee was still permitted, and it rapidly became the most popular substitute. Obviously, it wasn’t a wise idea to directly criticize their top boss, so shipmates snarkily referred to coffee as a “cup of Josephus.” Let’s face it, Josephus is a lengthy name, so it was swiftly shortened to a “cup of joe.” 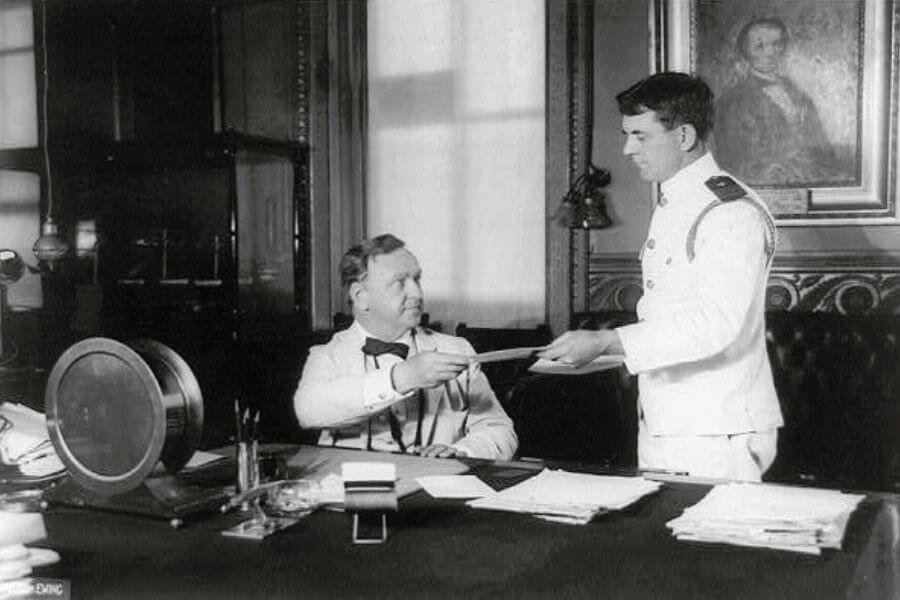 While this tale is entertaining, the consensus is that this most likely isn’t how the phrase came about. For one, enlisted Navy members served on largely dry ships — no alcohol on board — even before 1914.

That said, access to a libation was dependent on rank, the elite, aka the officers, could get hold of a tipple, but the vast majority of the Navy is made up of enlisted members.

Moreover, the phrase “cup of joe” was apparently not seen in print until around 1930, long after Josephus Daniels’ order. Not even in letters that sailors sent home. So while it is an entertaining story, it’s likely just that — a story.

This “a cup of joe” meaning is based on American slang. The name Joe is sometimes used to refer to a common, ordinary person. Joseph is also a popular name, and it’s often shortened to Joe.

Undoubtedly, you’ve heard the phrase “average Joe,” which means the regular guy down the street who doesn’t stand out from the crowd. It’s thought that “a cup of joe” is a reference to coffee being a basic, common drink that everyone can enjoy. As coffee’s popularity grew, it became available to all social and economic groups, not just those who could afford it.

The final notion suggests that “cup of joe” refers to a specific person. Martinson Coffee was founded by Joe Martinson in New York in the late 1800s. Local customers often described Mr. Martinson as someone who cared a great deal about his patrons, while having a big personality.

As such, his coffee was often referred to as “Joe’s coffee,” which eventually transitioned to “a cup of Joe.” New York is a major city and a popular place for tourists, so it’s possible that the phrase could have spread from there. Something that suggests this may be more than a tale is the fact that Martinson Coffee trademarked the phrase. 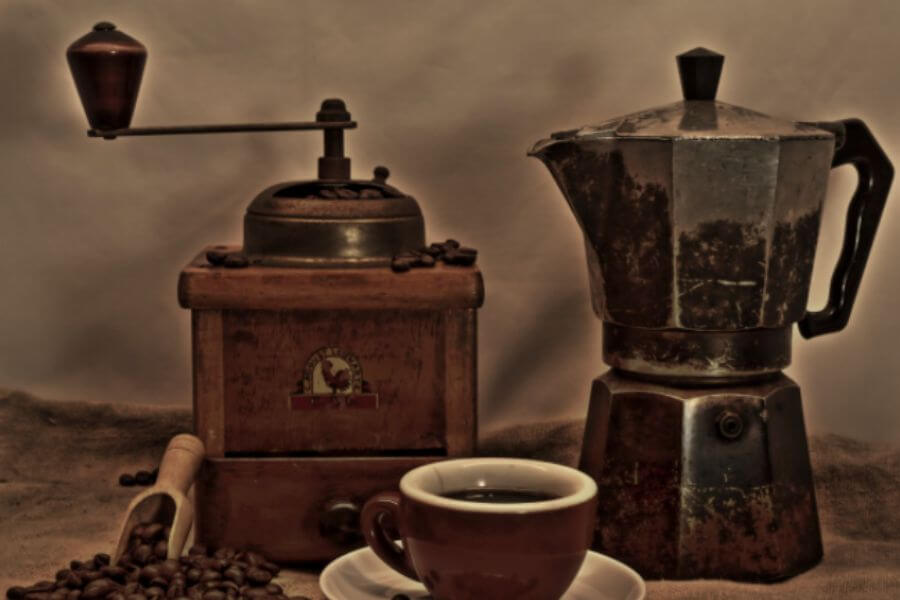 Which Story Is Most Likely?

So where did cup of joe come from? Unfortunately, there’s no definitive proof for any of these theories. We know it’s not likely the phrase originated with the Secretary of the Navy because the timing of events doesn’t tally up.

However, as for the other three — any, some, or none of them could be true. And really, that’s the fun with a phrase like this. Everyone has heard it, but no one’s entirely sure where it came from.

If I had to make an educated guess, I’d pick linguistics as the reason behind the expression. Language naturally evolves over time, and the idea that the word “jamoke” could gradually change into “joe,” makes sense — well, it does to me.

So there you have it. As fascinating as these stories are, they’re just that — stories. While there is a degree of plausibility to some of them, sadly there’s no proof that any are accurate. Logically, we’d place our bets on linguistics and language evolving naturally.

However, the phrasing — and stories! — have persisted for several decades, so they’re obviously here to stay. Hence, if you like the idea that a cup of joe could be used to make snide comments to your boss, or you agree that coffee is indeed a drink for the common man and average Joe, that’s fine by us.

When it’s all said and done, the origins of “Why is coffee called joe?” doesn’t matter much and definitely doesn’t influence our love of java.

Why Is Coffee Called Joe? FAQs

What Is Slang for Coffee?

Coffee has many monikers, some more creative than others. The common slang names include:

Is a Cup of Joe Meaning Coffee?

Yes, calling it a cup of joe is just another phrase for coffee. As we’ve seen, there are a few different stories as to how this phrase got started, and it remains a pretty popular term for referring to coffee.

Where Did Cup of Joe Originate?

No one’s exactly sure who developed the phrase. It’s possible that it naturally evolved through language, that it’s a reference to common people drinking a common drink, or that it was a way for the Navy sailors to make snide remarks about a superior.

What Is Joe Slang for?

Joe is a very common nickname for Joseph, and it’s also a popular American name. Hence, when used with coffee it’s thought to refer to how common the beverage is, and how it can be enjoyed by everyone.

Is “Cup of Joe” Trademarked?

Yes, “cup of joe” is trademarked by Martinson Coffee.

Is Cup of Joe British?

No. The term is generally considered to be an American locution. The British sometimes refer to tea or coffee as a “cuppa.”