A Guide to the 4 Main Types of Coffee Beans 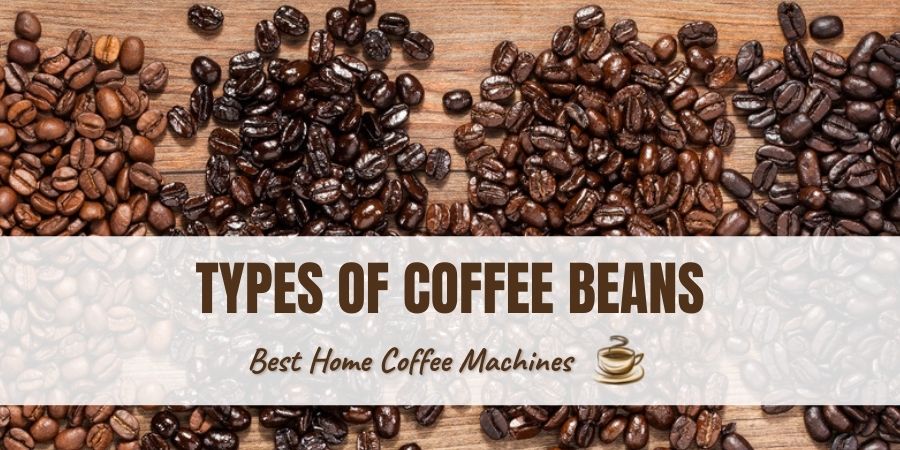 A Guide to the 4 Main Types of Coffee Beans

It sounds enticing (think of all the flavors you could try!) but the reality is that only a handful of these are used — and there’s a good chance you’ve only ever tasted a couple.

Which ones, you ask? Read on to find out!

What Are the Different Types of Coffee Beans?

Arabica, robusta, liberica, excelsa: these words may sound like a made-up spell from Harry Potter, but they’re the four main types of coffee beans.

Each one has unique properties and, therefore, a unique flavor profile and aroma. Let’s take a closer look at each type now.

By far the most widespread coffee bean, arabica accounts for 70% of all the coffee in the world, according to World Atlas. Other sources claim that as much as 75% of the planet’s joe is made from this bean. Either way, it’s indisputably the most favored bean.

So why is it so special?

For one, it’s widely believed that arabica was the first coffee bean ever discovered, so it’s considered the original and best. For another, arabica is notoriously tricky to cultivate. The plant needs perfect conditions to thrive and is disease-prone. Because it’s more expensive to produce, it’s considered a premium bean.

But the key reason arabica beans are so sought after is that they’re considered the tastiest. Arabica may have the most pleasant and palatable profile because its caffeine content is lower, allowing more room for sugars and fats and, therefore, its sweet, bright notes. In other words, it goes down the easiest.

Robusta is nowhere near as common as arabica, but it’s the second most important coffee bean because it’s the strongest, both in terms of flavor and caffeine content.

Robusta has approximately twice the caffeine of arabica and its flavor is much punchier. It’s bitter, bold, and is often described as having a burnt, almost rubbery taste. Because of this, robusta is favored by coffee drinkers who prefer the strong stuff. It’s also used in novelty coffees, like Death Wish and Black Insomnia — two of the strongest coffees in the world.

Robusta is extremely easy to cultivate. Its high caffeine composition wards off disease, and it adapts easily to its environment. This means production costs are generally lower than growing arabica, but also that quality control may not be as stringent. Since robusta can grow under all sorts of conditions, it is left alone more. 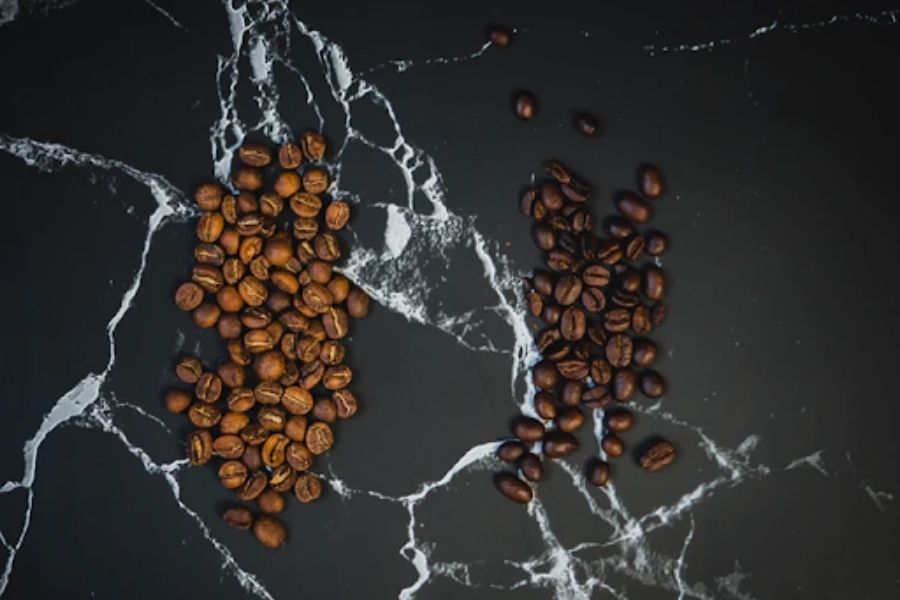 Even though liberica is harder to find and few people can say they’ve tasted it, it’s still one of the four main types of coffee beans. Though popular in Southeast Asia, it’s a bit controversial in the West, because it doesn’t taste like coffee.

There is no gray area here. People either revere liberica’s flavor or despise it with a burning passion. Liberica coffee’s flavor profile is bold, fruity, and smoky. But it has been compared to everything from delicious wood to burning trash. It’s also said to have a biting aftertaste.

Liberica is coffee: it’s caffeinated, bitter, and part of the Coffea genus but it doesn’t taste like the coffee we’re used to. Perhaps this is why, even though it’s the third most common coffee bean, liberica only makes up two percent of the world’s commercial coffee.

The main argument is that although excelsa and liberica look similar and grow in the same conditions, they do not taste similar at all. While liberica gets a bad rap for its unusual, shocking profile, excelsa is sought after for its unique and interesting medley of flavors.

Excelsa is said to have the qualities and flavor profiles of both light and dark roasts. Though curiosity may be the primary reason enthusiasts try this coffee bean, it has a positive reputation.

Despite its reputation for good flavor, it’s uncommon, difficult to find, and generally falls to the wayside in favor of arabica and robusta.

Which Coffee Bean Varieties Are the Best?

There is no straightforward answer because personal taste is subjective. Let’s take liberica as an example; some say it’s delectable and others say it’s disgusting. It’s really a matter of preference.

That said, arabica and robusta are considered the best coffee beans for a number of reasons. Let’s compare them.

Arabica vs Robusta: Which Is Better?

On the one hand, we have arabica. It’s considered the original coffee bean and by extension the ‘best,’ but for some, its reputation is overblown. On the other hand, we have robusta. Its big, bold flavors are underrated but as it’s highly caffeinated, it’s not to everyone’s tastes.

While I can’t tell you which one is best in the arabica vs robusta debate, I can compare the two:

Robusta wins this one hands down. It thrives in a slew of conditions and fights off most diseases without human intervention. Because it’s ridiculously easy to grow, production costs less and uses fewer resources.

In contrast, arabica has little will to live and has faced near extinction because of its climate and cultivation preferences.

I’d love to crown robusta the winner in the name of caffeine addicts everywhere, but arabica does have the more appealing and palatable profile. Widely produced and in high demand, arabica has a flavor profile that’s considered smoother than robusta.

Robusta is twice as caffeinated as arabica, but whether or not that’s a good thing depends on who’s drinking it.

I drink more coffee than I care to admit and couldn’t possibly sustain my habit with robusta (or I’d risk a heart attack). Others find arabica to be ‘light’ coffee, and prefer robusta’s punch, especially in espressos. Both are valid.

One more for robusta. Since it’s not as difficult to harvest, it costs less to produce and is, therefore, more affordable.

Robusta may be easier and cheaper to cultivate, but arabica has better quality control because of how sensitive it is to its environment. That’s not to say all arabicas are worth more or are better than all robusta beans, but rather that the chance of buying subpar robusta beans is much higher.

Coffee drinkers seem to appreciate arabica more, so it takes this round.

Robusta is appreciated the world over, and especially in Italy. But it punchy harsh flavor is not for the faint-hearted.

Arabica, on the other hand, is unanimously described as smooth and pleasant. And again, it outsells all other coffee beans by a landslide.

All things considered, arabica is the most successful coffee bean of them all. But the truly superior bean is the one that you like the most. 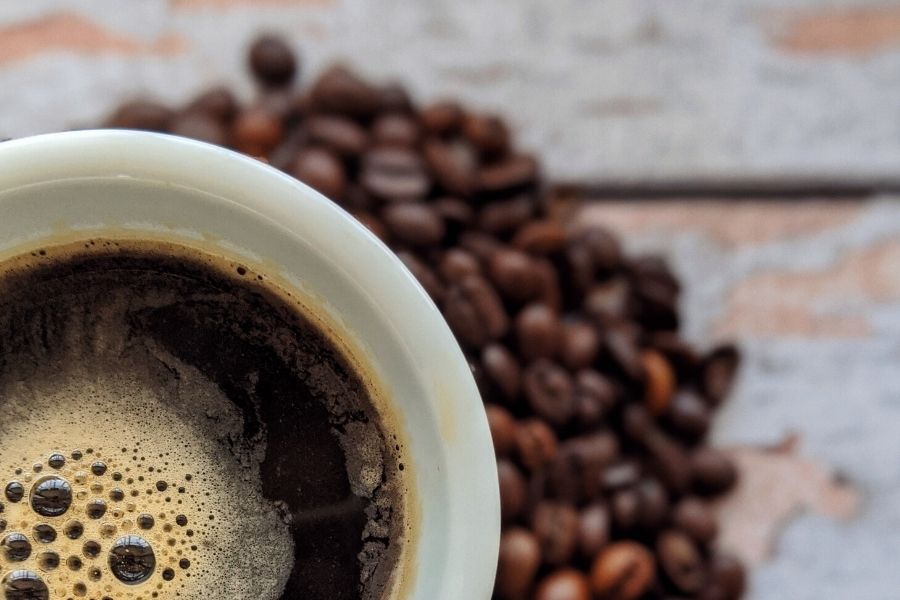 It’s clear that arabica has earned its place at the top of the bean hierarchy, but here’s something you may not have considered: beans can be altered for more interesting brews.

There are a few factors that determine what your brew’s true profile is, regardless of the species of the bean.

Not all arabica beans have the same flavor because arabica is a species, not a strain. A little-known fact is that there are many types of arabica beans, the two most common types are typica and bourbon. The latter is sweeter, slightly more astringent, and hearty with hints of caramel.

If you’d like to be extra meticulous when picking your brew, it may be worth investigating variations within the bean species, rather than the classification itself.

Roast is important because it determines a bean’s flavor when it’s brewed. These roast flavors are not universal though as each manufacturer sets its own standards. Generally speaking, here’s what you can expect:

That’s not to say that all arabicas are sweet and all robustas are bitter, rather that these are the qualities you’ll notice.

If you can’t choose between arabica and robusta, you could always opt for both. Coffee beans are mixed all the time to create complex yet balanced flavor profiles.

For example, blended arabica and robusta mix blend coffees are bold but sweet, highly caffeinated but not overly bitter, and full-bodied but not heavy.

You won’t have much luck finding other blends, though. It’s extremely uncommon to add liberica and excelsa to the mix as their quirky flavors clash with the traditional profiles of robusta and arabica. 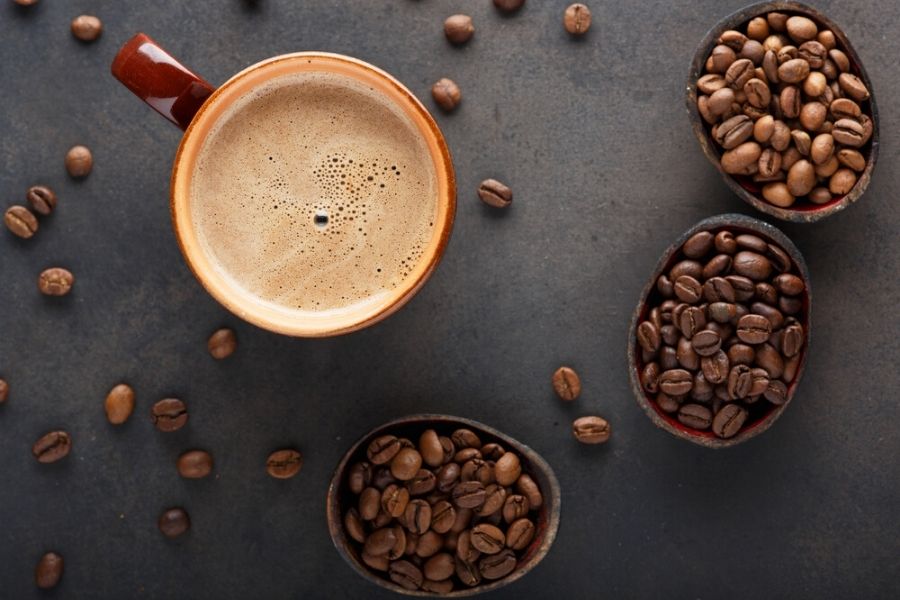 Even though there are more than a hundred types of coffee beans, only four of them are prominent in coffee production. Arabica is undoubtedly the bean of choice based on its flavor and quality, while robusta is a close second based on its strength.

Tasting different coffee beans is encouraged, but it’s not an obligation. At the end of the day, the beans you buy don’t matter as much as how their flavor is extracted. So, if you don’t want to break away from the comforts of arabica, you don’t have to. As long as you enjoy your joe, the beans that make it are irrelevant.

What Are the Best Types of Coffee Beans?

The best types of coffee beans are entirely subjective because it depends on your preferences. If you enjoy bold, high-caffeine coffee then robusta is ideal. If you like sweeter profiles, stick to arabica beans.

Keep in mind, though, that there are hundreds of types of coffee beans, roasts, and brewing methods that affect the quality and flavor of your coffee.

Which Is the Cheapest Coffee Bean?

Worldwide, robusta is one of the cheapest coffee beans because it is so easy to cultivate. But the price of coffee largely depends on where you are buying from. For example, in West Africa and Southeast Asia, liberica coffee is mass-produced and affordable. In the United States, however, it costs more because it’s considered rare and ‘exotic.’

What’s the Biggest  Difference between Arabica and Robusta?

The two main differences between arabica and robusta are caffeine content and flavor profiles. Arabica has an average of 1.2 to 1.5 mg of caffeine per 100 grams while robusta has double this amount.

Arabica is mild, sweet, and generally bright-tasting while robusta is strong, bitter, and bold.

Liberica coffee’s flavor is regularly described as pungent, but it has the lowest caffeine content of all coffee beans, averaging a maximum of 1.2 mg per 100 grams. So while it may have a strong flavor, it is not strong in terms of caffeine content.