How To Sweeten Coffee Without Sugar: 11 Ideas For Coffee Lovers

How to Make Coffee Sweet Without Sugar

While it’s perfectly okay if you enjoy your java black, rich, and bold, that’s a bit too much for some.

Most people prefer something additional in their coffee, whether that’s sugar, cream, or milk. White sugar will get you the desired sweetness if you need it, but if you drink more than one or two cups of java daily, those calories start adding up.

Wondering how to sweeten your coffee without sugar?

The good news is that there are plenty of options, including natural and artificial sweeteners and a few things you may not have considered.

We’ll cover some of the more common sweeteners, but we’ll also look at a few non-traditional methods for getting a sweeter cup of joe.

Here’s what we’ll cover as we delve into how to sweeten coffee without sugar:

Sugar, particularly refined table sugar, is one of the most commonly consumed foods in the United States.

According to the Centers for Disease Control (CDC), an average American adult consumes about 17 teaspoons of added sugar per day. White sugar contains 16 calories per teaspoon, so that amounts to more than 270 calories a day.

There are numerous reasons why people choose to restrict or completely avoid added sugar in their diets, and most of those are health-related. For example, people who have diabetes avoid added sugar.

People trying to lose weight often restrict their sugar intake, too. The keto diet and other popular low-carb diets restrict sugar consumption, both for weight loss and health conditions. And some people simply feel better, even healthier with less sugar in their lives.

What is the Glycemic Index?

While most commonly used to help diabetics regulate blood sugar levels, the Glycemic Index can also be useful for comparing table sugar with other sweeteners.

So to make low-GI coffee, for instance, it makes sense to ditch the sugar.

For the purposes of this article, natural sweeteners are those derived from a natural source and have minimal processing. However, not all of these sweeteners are made in the same manner, so it’s a good idea to check the label for ingredients.

This means real maple syrup, not that imitation syrup that is more common in stores. Real maple syrup is made from the sap of maple trees, and it should not contain additives. It’s very sweet and may also have a nutty or vanilla flavor.

Check out our maple latte recipe.

Honey is a natural sweetener that can be used to sweeten many kinds of food. It may be more popular for tea, but many people think honey tastes good in java, too. Raw honey is the healthiest, least processed version, so again, it’s important to read labels.

Raw honey not only sweetens but also contains vitamins and amino acids. It has a Glycemic Index of 58, which is slightly lower than sugar. There are 21 calories in one teaspoon of honey, though, more than what’s found in white sugar. Honey may take on flavor notes from where bees collect nectar, so you may find hints of floral flavors.

Agave syrup is made from succulent plants, the most common of which is a blue agave plant. Its flavor is fairly neutral, so it blends well with anything you’re attempting to sweeten.

It has a Glycemic Index of 15, considerably lower than the 65 for white sugar. Agave syrup has 21 calories per teaspoon, which is more than the calories in sugar. However, since agave syrup is about 1.5 times sweeter than table sugar, you won’t need as much to achieve results. 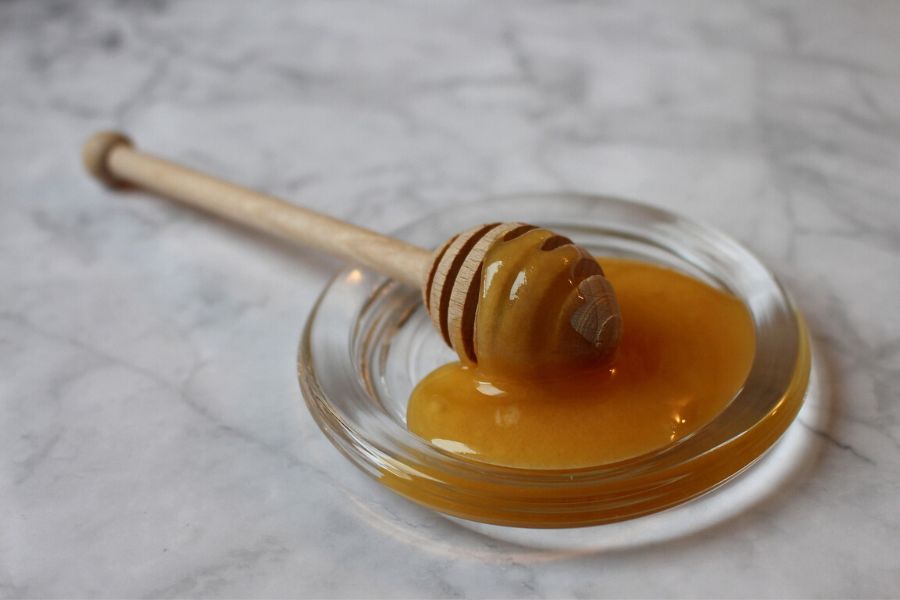 Wait, there’s sugar made from coconuts? Not exactly. Coconut sugar is made with sap from the flowers of the coconut palm tree. It tastes similar to brown sugar and has a mild flavor.

Coconut sugar is 35 on the Glycemic Index, so it’s noticeably lower than white sugar. It has 15 calories per teaspoon, which is also slightly less than table sugar.

Date sugar or syrup is made from dates, which are small, naturally sweet fruits. Date fruits, as they are officially known, grow on date palm trees.

Stevia has a Glycemic Index of zero, and it’s approximately 30 to 200 times sweeter than regular white sugar. It has no calories, which makes it a smart choice if you’re watching calories.

However, it does have a strong flavor that resembles licorice and may leave a bitter aftertaste. Stevia sweeteners have been approved for use in the United States since 2008.

Next up, artificial sweeteners. Some people prefer to avoid these, even though these sweeteners are all approved by the Food and Drug Administration in the United States. These sweeteners are chemically created in a laboratory and have been studied extensively.

Aspartame is created by chemically combining aspartic acid and phenylalanine. It has a Glycemic Index of 0, obviously on the scale’s low end. Aspartame does have about the same amount of calories per teaspoon as white sugar, but aspartame is approximately 200 times sweeter, so far less is needed to reach the desired sweetness. There’s no metallic or bitter aftertaste with aspartame, either.

Aspartame has been used in the United States since the late 1980s. You might know this sweetener by the brand names Equal, Nutrasweet, or Sugar Twin.

There are a few different ways that saccharin can be chemically created, resulting in multiple formulations. Like aspartame, saccharin has a Glycemic Index of 0. However, it has no calories, and it’s estimated to be about 200 to 700 times sweeter than white sugar. Saccharin is also known to have a bitter metallic aftertaste.

Saccharin has been regularly used in the United States since the late 1950s. Sweet’N Low, Sweet and Low, and Necta Sweet are a few of the trade names for this sweetener.

Sucralose differs from other artificial sweeteners because it’s actually made from sugar. This sweetener has been approved as a sweetener in the United States since the late 1990s. It’s more commonly known by its brand name Splenda.

This sweetener has been chemically altered from sugar to make it dramatically sweeter, anywhere from 400 to 700 times sweeter. Sucralose has no calories, and it’s a zero on the Glycemic Index. It does not have the bitter aftertaste that’s common with many artificial sweeteners. 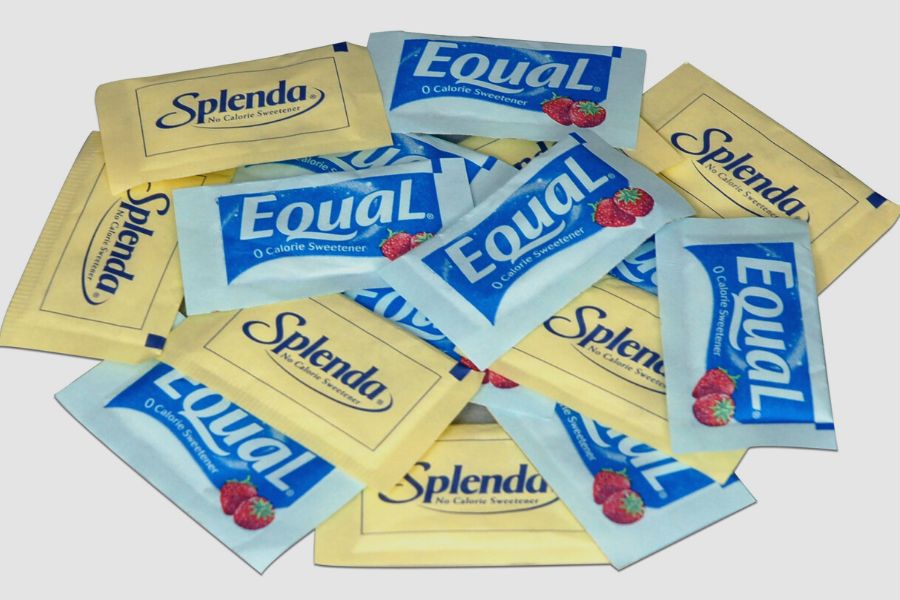 Sweeten Coffee Without Sugar or Sweeteners

What if you’re not looking for an actual sweetener, but a way to make your coffee taste better and mask some of the bitterness?

Your beverage may taste sweeter if you can block bitterness or acidity. Try adding one of these to your java.

Rather than adding a sweetener to your beverage, there are ways to brew a sweeter cup of joe. In fact, you may find that by changing your methods, you don’t need to sweeten your coffee at all.

Which One Is Best?

Truthfully, there’s not one perfect sweetener. Individual preferences vary from one person to another. One person may use only table sugar, while another may stick with Splenda or Stevia.

However, if you’re trying to avoid or cut back on sugar, there are several good sugar alternatives that you can use to sweeten your coffee. And if you want to go another step further and avoid sweeteners in general, there are some ways you can brew sweeter coffee or blunt the bitterness, instead of just adding a sweetener.

There are plenty of options that will compliment your beverage, without compromising its flavor. For some people, using one of these alternatives to sweeten your coffee is a much healthier option than refined white sugar. These sweeteners are also options if you’re wondering how to sweeten iced coffee without sugar. 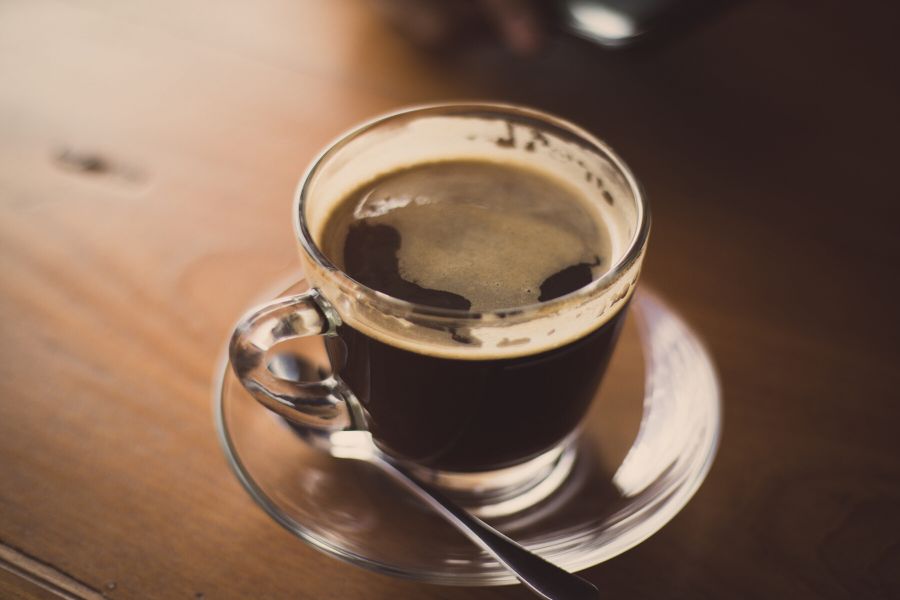 Which Is Better, Splenda or Stevia?

Stevia may be a better choice in terms of health than Splenda. Splenda is an artificial sweetener that’s made from white sugar and typically has no aftertaste. Stevia is made from the Stevia Rebaudiana plant. Both have no calories, but Stevia can have a strong taste that lingers.

How Can I Sweeten my Coffee Without Sugar?

Coffee can still taste good without sugar. Some people even prefer their coffee black, with no sweetener. However, if you need sweetness, there are many ways to do that with the non-sugar alternatives covered above.

Is Honey Better than Sugar?

Honey is different, but not necessarily better, than sugar when it comes to coffee. Table sugar has a relatively neutral flavor, while honey has a distinct flavor that may come through in the coffee.

Can I Put Vanilla Extract in my Coffee?

Yes, you can definitely add vanilla extract to coffee. It won’t necessarily sweeten your beverage, but vanilla has a slightly sweet flavor. We recommend no more than one-quarter to one-half teaspoon of vanilla extract for a regular size cup of coffee.

Are Sweeteners in Coffee Bad for You?

All of the coffee sweeteners listed in this article have the approval of the Food and Drug Administration in the United States. While there have been some concerns about their safety in the past, research continues to show that they are all safe for human consumption.

Does Coffee Without Sugar Make You Lose Weight?

Drinking coffee without sugar may help you lose weight, but only if you’re not replacing the sugar with another calorie-rich substance. For example, if you replace the sugar with maple syrup, they have comparable calorie counts, so you probably won’t notice any weight loss.