What Is White Coffee? Everything You Want to Know 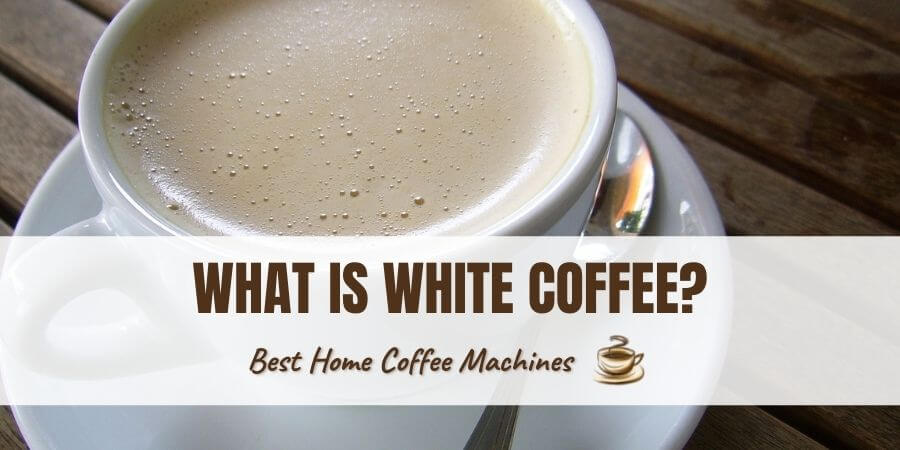 What Is White Coffee?

While we’re all familiar with light, medium, and dark roasted coffee, there’s another roast you may not have heard of yet. What is white coffee? These beans are a well-kept secret in the coffee world.

White coffee may appear a newcomer in the java world, but it’s been around for much longer. And, it comes with claims that it’s healthier than regular java, significantly more caffeinated, and easier for sensitive stomachs to tolerate.

So does it live up to the hype?

We’ll take a closer look at white coffee and what makes it different from the regular brew:

What Is White Coffee?

If you haven’t heard about white coffee, you’re in good company. Many people have never heard of this relatively new trend. White coffee, while not actually white, is the result of roasting coffee beans for less time, at a much lower temperature.

White coffee beans are considered to be halfway roasted and carry a whitish or light beige appearance when they’re removed from roasting. Hence, these beans brew a very light beverage. 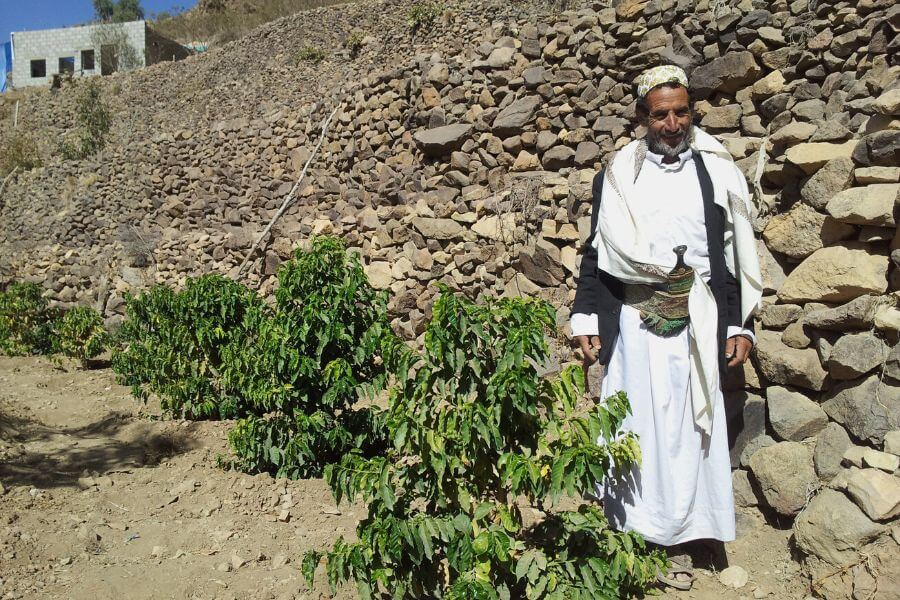 It’s believed that white coffee originated in the Middle East, more specifically in the Yemen region. And, while the coffee itself can grow anywhere in the usual regions known for producing it, the roasting process can also be traced to Yemen.

Traditionally, a spice mix called hawaji is added to white coffee. This mix includes cardamom, ginger, fennel, and sometimes cinnamon, cloves, or coriander. It adds to the exotic flavor that Middle Eastern java is known for.

How Is White Coffee Made? The Roasting Process

Once partially roasted, these beans are whitish or very light tan. They’re also extremely hard and dense. Because of that, only special commercial coffee grinders should be used to grind these beans. Your ordinary home coffee grinder is no match for these. However, commercial grinders do an excellent job of creating smoothly ground coffee.

So how does white coffee taste? Its typical flavors are nutty and sweet. Like light roast coffee, you’ll be able to detect aromas from the area where the coffee is grown, not just the ordinary coffee flavor.

Because these beans aren’t roasted for very long, organic acids don’t have time to evaporate during the roasting process. This creates a beverage that bears very bright acidity. For the same reason, white coffee has minimal bitterness.

Espresso is the ideal way to bring out the flavors of white coffee. However, you can also brew pretty good java with an AeroPress, French press, or moka pot. Again, white coffee will never be fully white, just paler in color than other roasts. If you doctor your coffee, almond milk goes well with the nutty flavor profile.

What White Coffee Is Not

We’ve covered what white coffee is, so let’s go over what it’s not.

White coffee may sometimes be used to describe other brewed beverages, which can lead to some confusion. For this purpose, white coffee refers to roasted coffee beans.

So how does white coffee compare to regular roasted coffee?

White coffee may not be readily available at all cafes or stores. In many areas, it’s still considered a novelty, so it’s sometimes more difficult to find than other roasts.

This java doesn’t taste like typical coffee. It possesses more acidity but less bitterness than regular roasts. While some light roast coffees have flavor hints of fruit or flowers, white coffee tends to taste nutty and sweet.

This cup of joe has a thinner body than other roasts and can appear almost translucent, compared to regular coffee. When brewed, white coffee has a pale beige color, rather than the classic dark brown most people associate with coffee.

As far as the price tag goes, the cost of white coffee is comparable to that of other coffee roasts. That said, it’s sometimes a touch more expensive, simply because it’s not as common.

This is where we see the biggest difference between white coffee and other roasts. Espresso is the recommended brewing method, to maximize the flavors and coax them out.

White coffee beans are harder and denser than other roasts, which makes them somewhat more difficult to brew with. A moka pot, French press, or AeroPress can also deliver some pretty yummy results.

As a rule, grinding your own coffee beans is recommended, just before brewing. This is the best way to ensure you end up with fresh flavors. However, if you try to grind these beans with a regular home-use coffee grinder, you’re probably going to have to buy a new one. For this reason, pre-ground white coffee is much more common than whole beans. Save your grinder for other roasts.

Some coffee roasters claim white coffee has 50-70 percent more caffeine when comparing white coffee vs. black coffee caffeine levels. This is based on the idea that the longer coffee beans are roasted the lower the caffeine.

In reality, the caffeine content of different roasts is pretty similar, and the same holds true for white coffee caffeine. It may have slightly more than other roasts, but the claim that it has significantly more hasn’t been proven.

Like all java, white coffee may be beneficial for your health. For example, research has shown that drinking coffee may reduce your risk of certain cancers, diabetes, and cardiovascular disease.

Because it hasn’t been roasted as long as other beans, white coffee may even contain more antioxidants than other roasts. Some of those antioxidants are reduced with extended roasting times. This may offer even more protection from certain health conditions than regular coffee. 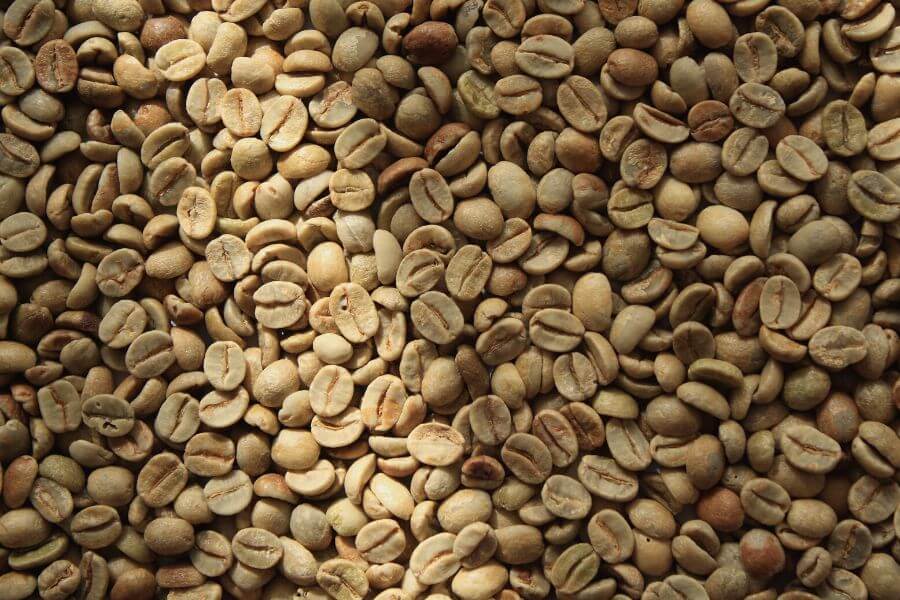 How to Get the Most out of White Coffee

Much like it can be difficult to properly roast white coffee, it’s not always easy to brew it, either. Fortunately, we can suggest some tips that will help you brew an awesome cup of joe.

White coffee is enjoying some newfound popularity, but it has a centuries-long history originating in the Middle East. These beans are partially roasted at a much lower temperature and for less time than other roasts.

These extremely hard and dense coffee beans are usually only ground with a commercial grinder. For this reason, it’s difficult to find them in the form of whole beans. When brewed, these coffee beans produce a beverage that has a bright acidity and nutty flavor, without the bitterness sometimes found with dark roasts.

Despite its name, neither coffee beans nor the brewed beverage are white. The beans are usually light tan or off-white, while their brewed coffee is beige and much thinner than darker roasts.

Admittedly, white coffee isn’t for everyone, but it’s time to stop wondering, “what is white coffee?” and try it out for yourself.

What Is White Coffee? FAQs

What Is the Difference Between Regular Coffee and White Coffee?

Yes. White coffee comes from the same coffee plants that are used for darker roasts. This type isn’t roasted as much as other roasts, which gives it a different flavor and texture.

Sorry to disappoint, no. The beans are whitish or light tan. Java brewed from these beans has a pale beige color, considerably lighter than most other coffee roasts.

Are Blonde and White Coffee the Same?

No, blonde roast and white coffee are not the same. Blonde roast is another term for light roast.

What Is the Difference Between a White Coffee and a Flat White?

White coffee gets its name from the appearance of extremely light roasted coffee beans. A flat white, on the other hand, is a beverage made from a combination of brewed espresso and steamed milk.

White coffee doesn’t taste like traditional brew. Some people have compared its taste to tea, rather than java, and it often has a nutty flavor. The degree of roasting is a major determinant of coffee’s flavor. When beans are only partially roasted, coffee brewed with those beans won’t taste like darker, more traditional coffee roasts.