What Is Chicory Coffee? How It’s Gone from Plant to Coffee

What Is Chicory Coffee?

What is chicory coffee? Popular in the New Orleans area of the United States, some parts of Europe, and India, chicory by itself is not actually coffee at all. However, more than two hundred years ago, people began to add this herbaceous perennial to coffee, and the new beverage caught on.

Along with being added to a cup of joe, chicory can also be brewed, or steeped on its own. Its texture is similar to that of coffee, and it’s caffeine-free. This makes it a smart substitute for people who are cutting back on caffeinated coffee.

So how did this flowering plant find its way into cups of java? And what has given chicory coffee staying power? As we take a closer look at chicory coffee, these are some topics we’ll cover:

If you live outside of the southern United States, you may not have even heard of chicory. What exactly is it?

Chicory is a flowering plant in the same family as dandelions, and it often has bright blue flowers. Doesn’t sound much like coffee, we know, but its roots are used for brewing, not its leaves or flowers. However, those leaves and flowers are edible.

There’s a difference between chicory and chicory coffee. As mentioned, chicory by itself usually refers to the roots, which can be roasted, ground, then brewed, or steeped. When brewed, it possesses a flavor that’s woody and earthy, with a nutty aroma.

It doesn’t quite taste the same as a regular brew, but its texture is somewhat similar. Chicory also has zero caffeine, so it makes an ideal substitute for coffee if you’re trying to eliminate the stimulant from your diet. And, it’s typically less expensive than java.

However, by mixing chicory with regular coffee you end up with chicory coffee. This can be a perfect way to cut down on caffeine while still enjoying your cup of joe.

Yet, what does chicory coffee taste like? It will add a woodsy flavor to your regular java. Chicory is naturally low in acid, making coffee more tolerable for those with sensitive stomachs. It can also temper some of the bitterness found with dark roast coffees. And, it’s ideal for cold brew.

History of Coffee and Chicory

It’s believed that chicory coffee first appeared in France, possibly as a result of one of Napoleon’s blockades in the early 1800s. Why is chicory mixed to coffee? Coffee was in short supply, and the French used chicory as a way of stretching out their java supplies or even as a drink on its own.

Chicory eventually found its way to New Orleans in the United States, which was settled by the French. During the American Civil War, there was another blockade, and much like in France, there was a coffee shortage. Again, chicory came to the rescue as a way to make supplies last longer.

Is chicory good for you?

Chicory has been used for medicinal purposes for thousands of years. While the chicory coffee benefits are yet to be fully verified, there is reason to believe that it is good for you.

Raw chicory contains several nutrients the human body needs. Vitamin B6 and manganese are considered essential for brain health. Folate, potassium, and Vitamin C are also present and can help lower the risk of certain diseases.

Chicory also contains inulin, which is a prebiotic. Prebiotics are believed to improve digestive health and have been associated with a lower risk of certain cancers and liver disorders.

Even for those who don’t want to mix it with their java, chicory leaves can be used to make salads or be cooked as greens. 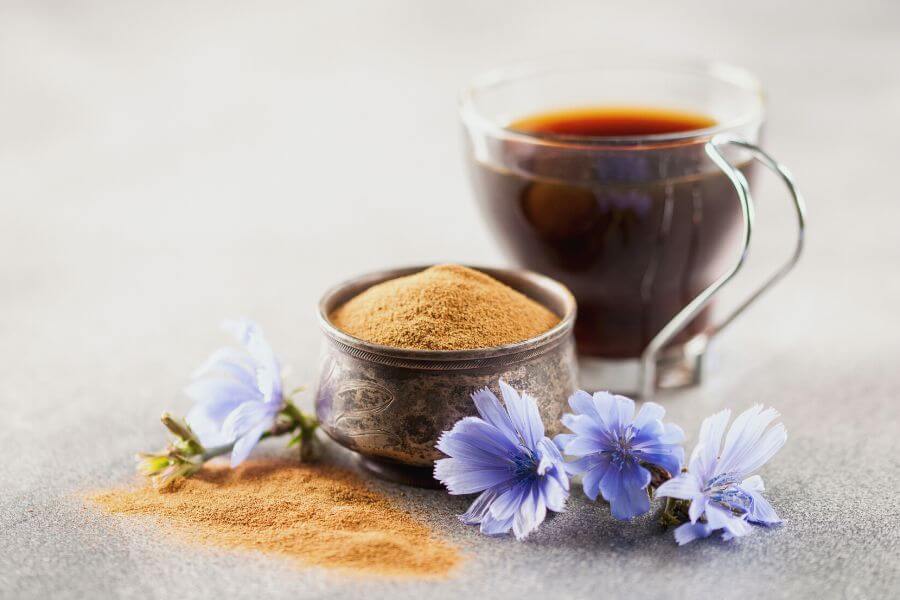 Like virtually any food or drink, there can sometimes be negative side effects from consuming chicory, whether the root itself or in coffee. Experts suggest you can safely consume up to 20 grams daily. That said, chicory can trigger allergic reactions — sometimes severe, although these are extremely rare. However, it’s recommended that people should avoid chicory if they’re allergic to ragweed or birch pollen.

Excessive intake of chicory can also cause some digestive discomfort, such as gassiness. And, it’s not known if the plant is safe for moms-to-be or women who are breastfeeding. Hence, it may be best to avoid if either of those situations applies.

How to Brew Chicory

Brewing chicory isn’t tricky, but does take some time if you’re roasting and grinding the chicory yourself.

Before you get started, gather your supplies. Whether you’re making chicory coffee or brewing chicory, we’ve listed everything below:

Step 2: Lay the diced chicory root on your baking pan, then roast in an oven at 350 degrees Fahrenheit until golden brown.

Step 3: Remove from the oven and set aside to cool.

Step 4: Once cooled, grind the chicory root as you would coffee beans.

Step 5: If you choose to brew only the chicory without blending it with coffee, simply brew it as you would coffee. Alternatively, you can heat 8 ounces of water and stir in 1-2 tablespoons of chicory.

Step 6: If you’re blending chicory with regular coffee, you can choose your own ratio. The most common is one part chicory to two parts coffee (1:2 chicory:coffee), but you can adjust it to your own preference.

Step 7: Brew the blend as you would normally make regular coffee. Enjoy! 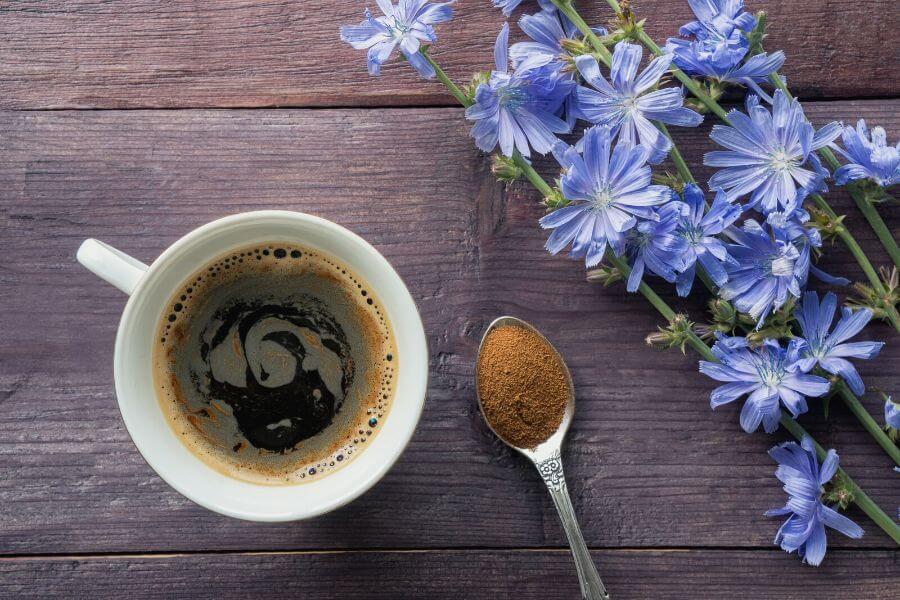 Admittedly, chicory coffee, meaning chicory blended with coffee, can be something of an acquired taste, but for those who love it, it’s a challenge to go back to plain old java.

It also creates a couple of brewing options. You can roast, grind and blend the root into your regular coffee or brew into a beverage that can be enjoyed on its own. Plus, it’s relatively easy to make, although the process of roasting and grinding chicory root takes some time.

And, while it was originally used to stretch coffee supplies out during shortages in the early 1800s in France. Eventually, it made its way to the New Orleans area of the United States, and it’s remained a popular beverage in that region ever since.

So, what is chicory coffee? Try it for yourself and see what you think of the flavors!

What Is Chicory Coffee? FAQs

Is Coffee with Chicory Good?

While many people love the flavor of chicory coffee, it may not appeal to everyone’s palate. Chicory does have a texture and flavor that’s similar to java, while it can add a woodsy flavor and nutty scent to your coffee.

Why Is Chicory Mixed with Coffee?

It’s believed that people first added chicory to coffee as a way to make their java supplies last longer when there were shortages. Some liked the flavor and continued doing that, even after coffee was plentiful.

How Much Caffeine Is in Chicory?

None! Chicory itself is completely caffeine-free, so it’s perfect if you need to dial back the caffeine in your diet. If you’re blending chicory with regular coffee, though, you’ll still consume caffeine.

Chicory coffee is considered safe for the vast majority of people. In some very rare cases, it can cause an allergic reaction, so if you’re allergic to birch pollen or ragweed, it’s best to avoid it. It’s not known if it’s safe for women to consume while pregnant or breastfeeding.

While the health benefits of coffee are heavily documented, the research on chicory is limited. However, experts believe consumption has a positive effect on the human body.

Chicory coffee appears to have originated in France. During a blockade, there were shortages, and people turned to chicory as a way to make their coffee stashes last longer.

How Much Chicory Do I Mix with Coffee?

You can start with a 1:2 ratio of chicory to regular coffee. If you feel the chicory flavor is overpowering, add a little more coffee or less chicory. If it’s too weak, add more chicory to the blend.

Chicory is naturally low in acid, so adding it to your regular coffee will reduce the acidity of the beverage, at least by a small amount.