Madagascar Coffee — What It Is and Why You Should Try It

Madagascar coffee probably isn’t the first thing you think about when it comes to different java varieties. While this country is home to species of plants and animals that can’t be found anywhere else in the world, it also has a rich coffee history.

Madagascar’s climate and topography are well-suited for coffee plants. However, production has dropped significantly from its peak in the 1980s. This country exports about one-fifth of the coffee it produces, but domestic consumption takes the rest.

Because this African island is still a very undeveloped country, coffee is mostly grown on small family farms. These farms rely on natural, traditional means for farming, rather than commercialized methods.

As we look at coffee from this remote island, these are some topics we’ll cover:

Madagascar is an island country in the Indian Ocean, located about 250 miles off South Africa’s southeastern coast. The island consists of a coastal area, a plateau, along with lower plateaus and plains. This range of elevations and the climate make an ideal environment for growing coffee.

About 28 million people call Madagascar home. However, Madagascar is among the least developed countries globally. It’s best known for its biodiversity in wildlife, with about 90 percent of the island species not seen anywhere else in the world. 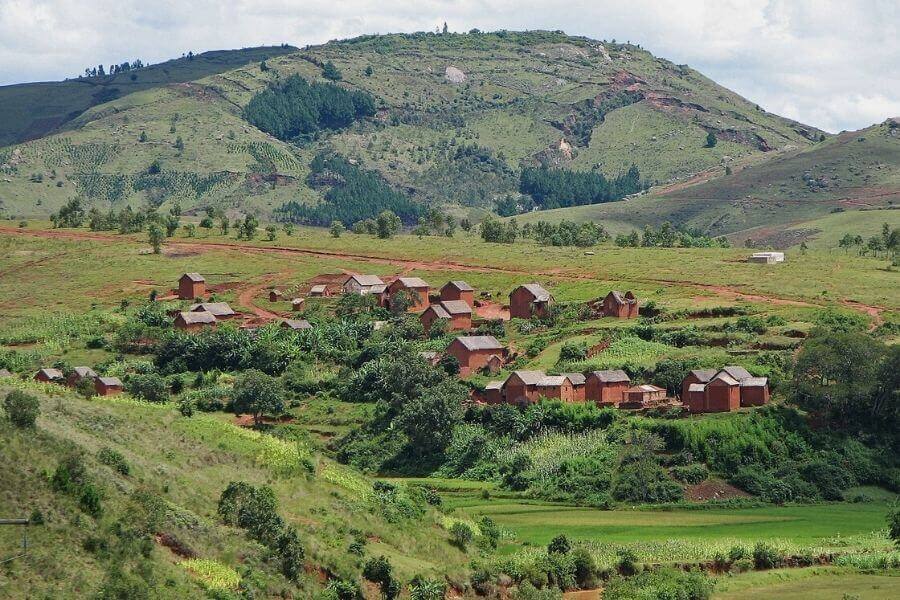 It’s believed that coffee plants were first introduced to Madagascar through a neighboring island. Ethiopia introduced the plant to Reunion, also known as Bourbon Island, then it found its way to Madagascar, but it wasn’t popular originally.

When French colonists came to Madagascar, they recognized the importance of trading coffee. By the late 19th century, the island had been introduced to the beverage, and by the 1930s, it was one of the major exports of Madagascar.

The industry continued to grow — from around 1960 to the 1980s, this island was the 8th largest producer of coffee worldwide. At its peak, Madagascar was producing about 1.1 million 60 kg bags yearly.

In the late 1990s, coffee prices plummeted. Combined with the poor condition of Madagascar’s infrastructure, production decreased dramatically. Today, it’s estimated that Madagascar produces in the region of 300,000 60 kg bags of coffee per year.

In Madagascar today, coffee is mostly grown on small family farms. Only part of what’s grown in the country is exported. The rest is consumed domestically, either through farmers who drink their own product or street vendors.

Most coffee grown on Madagascar is likely organic, but without the certification to label it as such. Madagascar coffee farmers rely on traditional methods for growing and harvesting coffee. It’s usually picked by hand and processed naturally.

Roughly 90 percent of the java grown is Madagascar robusta coffee, with the other 10 percent being Arabica. Robusta is grown in more tropical parts of the country, at altitudes around 100-300 meters (320-984 feet). Arabica is grown in the higher elevations, and most of those beans are used in specialty javas.

And, although Robusta coffee has a reputation for being harsh and bitter, Robusta grown in Madagascar is smoother. 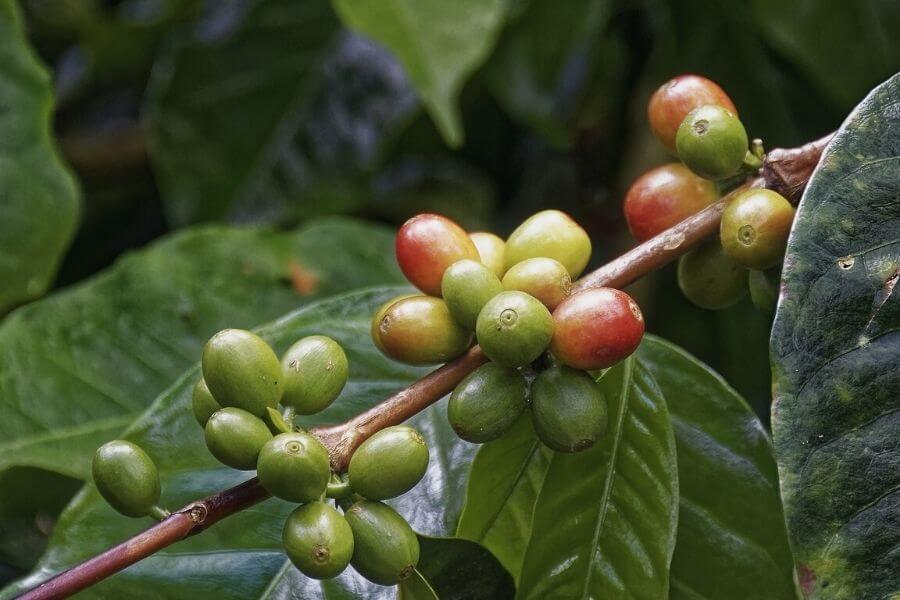 It’s one thing to drink coffee in Madagascar. It’s quite another to drink it the Madagascar way. Traditionally, it’s strong coffee and served either black or with condensed milk. Its bold flavor is favored by locals.

Street vendors often sell the beverage at a lower price than cafes, so they’re very popular with residents. These roadside traders usually make their own coffee by pan roasting local green coffee immediately before grinding the beans and brewing. This gives your beverage a different flavor than you’d get with commercial roasting methods.

If you’re buying green coffee, Madagascar has an unusual tradition of using empty condensed milk cans to scoop coffee from bags. This sweet milk concentrate is a sought-after product in this country, so they reuse the cans. Coffee is literally sold by the amount scooped in a condensed milk can.

Madagascar is a remote island that’s still relatively untouched by commercialism, and this extends to its coffee. Although the country was once one of the largest producers in the world, coffee production now consists almost entirely of small or family farms.

Both Robusta and Arabica coffee are grown in Madagascar, but Robusta coffee makes up the majority of the market. And, while this type of coffee has a reputation for being bitter, the beans grown in Madagascar are rather smooth and less harsh.

Coffee is a huge part of life in this island country, with vendors on most city street corners. Traditionally, the beverage is a strong brew and served either black or with condensed milk.

Madagascar-grown coffee can be a challenge to find outside the country — only a fraction of what is produced is exported. The residents consume the rest, and there’s no doubt that they love Madagascar coffee. 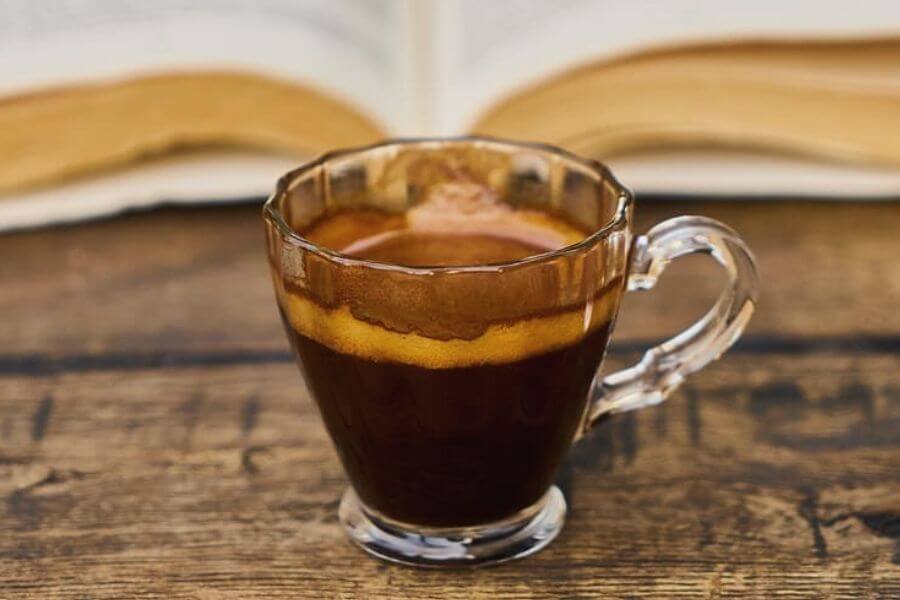 Yes, Madagascar coffee beans are used to brew strong java. Most coffee grown on Madagascar is Robusta, which naturally has a harsher flavor and more caffeine than Arabica.

Do They Grow Coffee in Madagascar?

They do grow coffee in Madagascar. While production is significantly lower than it used to be, the country still produces coffee. However, most of it is consumed domestically.

Yes, coffee is among Madagascar exports, with the majority going to France. The two countries have a long history of partnerships — French colonists were responsible for introducing coffee as a beverage to the island.

How Much Coffee Does Madagascar Produce?

According to the World Population Review, Madagascar produced approximately 47,387 kg or 52,235 tons of coffee in the most recent year.

Where Is Coffee Sold in Madagascar?

Everywhere! You can buy green coffee from markets and roast it yourself. You can buy it already brewed from cafes, but you can also buy brewed coffee from any of the thousands of street vendors.

For coffee, Madagascar residents like it strong. This is especially true because it’s usually brewed with Robusta beans, which have a naturally bitter, harsh flavor. You may taste other flavors in the beverage, depending on how your coffee was roasted.