Macchiato vs. Latte — What’s the Difference? 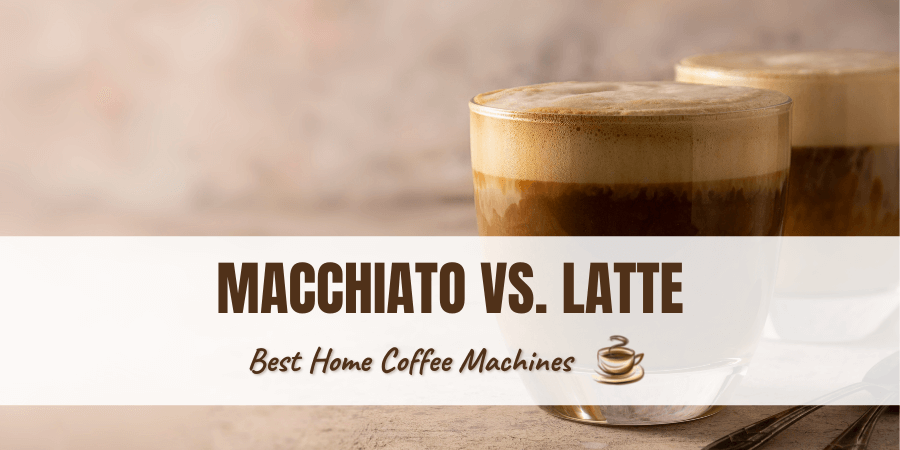 Macchiato vs Latte: What’s the Difference?

I’m back with another coffee contest — a macchiato vs latte match-up. This time, our contenders have more in common than you may realize. Both are espresso-based, both are milky, and both are immensely popular drinks. So which one is the king of coffee, and why?

Grab a cup of your favorite joe, place your bets, and read on to learn the differences between macchiatos and lattes. By the end of it, you’ll know which one to order next.

Macchiato vs Latte: Which Is Which?

You may be asking, ‘Is a latte the same as a macchiato?’ It’s easy to confuse the two. Heck, you even find a drink called a latte macchiato, so what’s the deal?

These two drinks are similar — made from the same stuff, and in some cases, the brewing methods are near identical. But macchiatos and lattes aren’t interchangeable. Before we get into what sets them apart, let’s take a refresher course to establish what they are.

How Is a Latte Made?

A latte is made by pouring a shot (or two) of espresso, then combining it with steamed milk, and topping it off with milk froth.

Lattes are traditionally enjoyed warm, but iced lattes are all the rage. In the case of the latter, there are ample ways to make one. Baristas may use chilled or cold-brewed coffee, cold milk, ice — or a combination of these elements. Some cafes offer flavored lattes that include syrups, sweeteners, or other ingredients.

Lattes are a firm favorite because they’re delectable, easy on the palate, and contain espresso for that caffeine kick we all love. 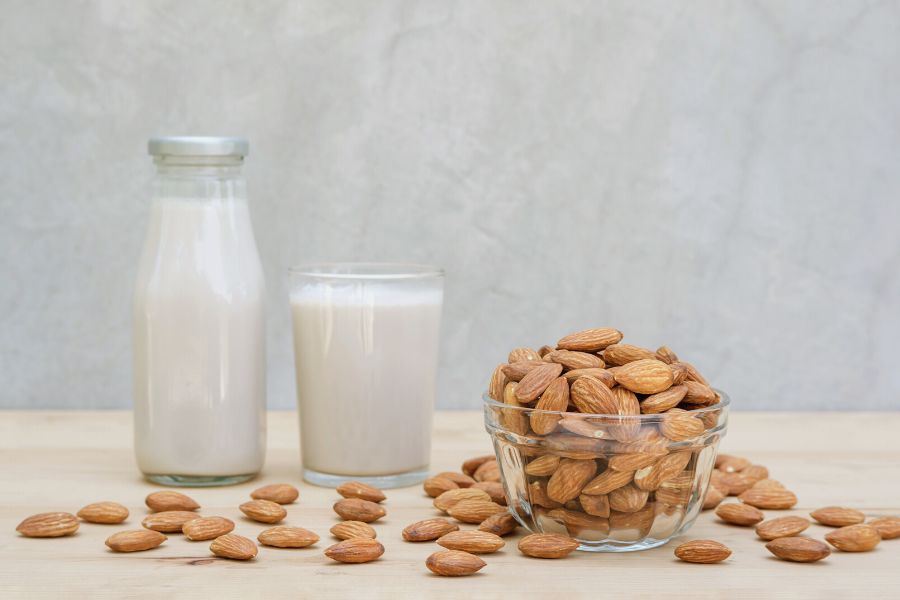 How Is a Macchiato Made?

Macchiatos are more complex than they let on. Standard, or espresso macchiatos are made by pouring a shot of espresso and adding a layered dash of milk on top.

Like lattes, there are several variations in how they’re brewed and what they taste like. Latte macchiatos are — as implied — brewed similar to lattes, with a reversed ratio. It’s mostly milk and a layered hint of espresso with foam on top.

Flavored macchiatos, like the famous caramel macchiato from Starbucks, include extra layers — syrups, sweet sauces, you name it — for extra flavor, sweetness, texture, and indulgence.

Espresso macchiatos are generally served warm, but iced macchiatos abound. It’s no different from lattes in this case. Ice, chilled milk, or chilled coffee are layered instead of standard hot ingredients.

Tip: If you’d like to know more, check out my comprehensive guide on What Is a Macchiato? You’ll even learn how to make your own!

While they’re the same at first glance, latte macchiatos and lattes are not at all the same thing, and you’ll have entirely different taste experiences with each.

There are two key differences:

First, they are poured differently. With lattes, the espresso is poured first and the steamed milk is added to it before it’s topped off with foam. Macchiatos are milk first, then the espresso and foam to end off.

Second, lattes are blended while macchiatos are layered. Milk is denser than coffee, so in lattes, it sinks into the espresso and combines with it. With macchiatos, the espresso is able to rest on top of the milk because it’s lighter. This gives macchiatos a defined gradient.

What’s the Difference Between Latte and Macchiato Drinks?

Think of macchiatos and lattes as fraternal twins or, as the memes say, ‘same same but different.’ Let’s weigh them up, and compare what sets them apart.

If we’re talking about latte macchiatos, there isn’t a clear difference between how ingredients are distributed in each drink. With espresso macchiatos, the ratio is vastly different.

Lattes are mostly dairy, consisting of one-third coffee and two-thirds milk, with a layer of foam added for texture. Traditional macchiatos are 90 percent coffee and 10 percent milk.

It seems a bit unfair because technically, macchiatos can be lattes, but there is a clear winner here. We’re Best Home Coffee Machines, not Best Home Milk Machines.

Macchiatos take this one.

Macchiatos may have a higher coffee concentration, but does this make a difference? Absolutely.

If you’ve ever added plant-based milk to your joe, you’ll know there is little difference in flavor when compared to dairy milk, but the coffee feels different — thin, almost. That’s because dairy contains fat, which thickens and softens your brew.

Lattes are creamier than macchiatos. This may not be everyone’s preference, but the consensus is that it goes down easier and makes a more pleasant, palatable coffee experience.

We’re one-one. Who will win?

Sorry to keep you on your seat, but this one’s a tie. Taste is subjective, so only you can decide which is superior. Still, there are a few considerations.

In the coffee world, strength usually refers to boldness. So, is a latte or macchiato stronger?

Well, since lattes have such a high milk-coffee ratio, they’re sweeter. Dairy contains natural sugars — which is why coffee with milk is less bitter and astringent, even if you don’t add sweetener. Macchiatos are the opposite, so they’re bolder.

The winner here depends on how pungent you prefer your coffee flavors. If you enjoy a softer drink with coffee for flavor, pick the latte. If you want the bitter, roasted flavor of espresso without the bite, go for the macchiato.

Macchiatos may have a much higher concentration of caffeine, but this doesn’t mean anything if you’re looking for an energy boost. The scoreboard is thus:

Cultural norms shouldn’t weigh in too much when you’re choosing your drink, but I like to compare which beverages are more favorable. Hype may not always be a good thing, but there’s a reason some things are more popular than others. So in our macchiato vs latte stand-off, which gets the popular vote?

Macchiatos are back in it. According to Taste Atlas’ list of the 50 Most Popular Coffees in the World, lattes rank 24th, while macchiatos beat it by ten spots, coming in 14th place.

Are we surprised? I think Starbucks’ caramel macchiato is to blame for this one.

Round 6: Which Is Healthier?

And so we get to the decider. Which one is better for your body? Oh boy, this one is a mess.

You see, overall, caffeine isn’t bad for you, so, as long as you’re enjoying it in moderation, it doesn’t weigh in much. Still, it’s wise to go for the macchiato if you’re sensitive to this popular stimulant.

Lattes are packed with dairy, so they’re higher in calories (because of those fats and sugars I mentioned). Hence, if you’re following a diet, watching your blood sugar, or trying to slim down, again, go for the macchiato.

However, caramel macchiatos are obnoxious and persistently rank as one of the unhealthiest coffee drinks — at least where Starbucks is concerned. Standard lattes are considered a little more wholesome because milk has a ton of nutrients. Still, flavored lattes are right beside caramel macchiatos in the naughty corner.

So, the simplest way to settle this is to once again narrow it down. We’ll compare a regular, unsweetened, single-shot latte to an equally matched espresso macchiato. We’ll also assume the drinker has no dietary restrictions.

Lattes are packed with good stuff, including vitamin C, calcium, potassium, and good fats, but they’re higher in sugar and sodium, and contain trans fats — the worst fats of them all. Macchiatos have almost no nutritional benefit, but they contain almost no sugar and zero bad fats. Ultimately, you can drink a macchiato guilt-free.

Macchiato Vs Latte: Which Should You Order?

Macchiatos may have won the match-up, but that doesn’t mean they’re the best option for you.

When next you visit a cafe, go for a macchiato if you’d like a bolder coffee that’s better for your body. Pick the latte if you want to treat yourself, don’t mind the higher calorie count, and want something a little sweeter.

Remember, there’s a middle ground. If you can’t choose between macchiato vs latte, try a latte macchiato. You’ll practically get the best of both worlds!

Is a Macchiato Just an Upside Down Latte?

Is a Latte the Same as a Latte Macchiato?

They’re similar, but no. Baristas brew lattes by adding steamed milk to a shot of espresso and adding a thick layer of milk froth to finish it off. Latte macchiatos are brewed by adding the milk first and layering the espresso to rest on top, before finishing off with milk froth.

In short. If your drink is blended, it’s a latte, if it has a milk-coffee-foam gradient, it’s a macchiato.

Which Has More Milk? Macchiato or Latte?

It depends on the type of macchiato. Espresso macchiatos contain little dairy. They’re 90 percent coffee and 10 percent milk. Whereas, latte macchiatos are the opposite, similar to true lattes. However, lattes tend to have more foam, so for the sake of simplicity, they have more milk than macchiatos.

What’s the Difference Between Iced Latte and Macchiato?

Are Macchiatos Stronger than Lattes?

Macchiatos are bolder than lattes by far because they don’t contain enough milk to significantly dilute the espresso’s flavor profile. Since lattes are mostly milk, the coffee’s flavor is softened.

In terms of caffeine, lattes are stronger. Macchiatos have a higher caffeine concentration but they are served in lower volumes.